SEOUL, South Korea — The ex-boyfriend of late K-pop star Goo Hara was jailed by an appeal court Thursday for blackmailing her over sex videos that played a part in her apparent suicide. 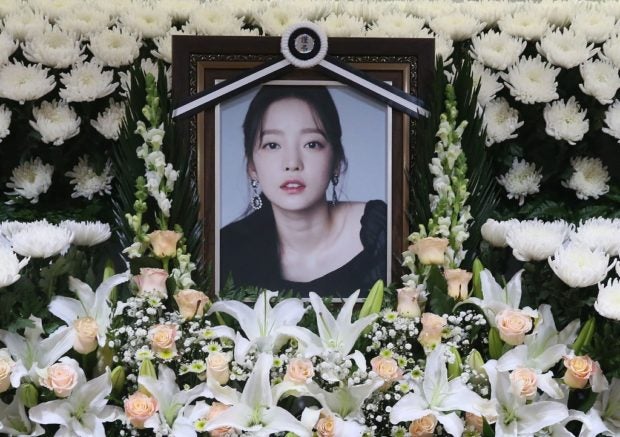 The portrait of late K-pop star Goo Hara is seen surrounded by flowers at a memorial altar at a hospital in Seoul on November 25, 2019. Photo by str / Dong-A Ilbo / AFP) / South Korea OUT

In 2018, Goo — a member of former girl group Kara — told local media that her ex had threatened “to end her entertainment career” by leaking their sex videos.

A CCTV clip of the couple showed the singer kneeling before him seemingly begging him not to.

Goo was found dead at her home in November, and is widely believed to have taken her own life after being targeted by abusive online comments following the reports about the videos.

The man, hairdresser Choi Jong-bum, was last year convicted of multiple crimes including blackmail and inflicting injuries, and was given a suspended jail term.

Both he and the prosecution appealed, and the Seoul Central District Court on Thursday ordered a heavier sentence, jailing him for a year.

His blackmail over the footage had “seriously damaged” the late star’s reputation, it said, and had left her with “irreversible trauma.”

Choi “was well aware that the degree of damage would be very serious if the sex videos were leaked, given that the victim was a famous celebrity,” the court said in a statement.

But the court concluded there was “not sufficient evidence” that she did not consent to be filmed.

In conservative South Korea, women who appear in such videos often feel shame — despite being the victims — and face ostracism and social isolation if the images become public.

Goo focused on her solo career after Kara broke up in 2018 and completed a tour of Japan with her latest release shortly before her death in November.

About six months earlier, she had apologized to fans after being hospitalized following a suspected suicide attempt, saying she had been “in agony over a number of issues.”

Her Instagram account had long been flooded with hateful comments about her appearance and her history with Choi.

Goo’s death came a month after Sulli — another K-pop star and a close friend of hers — took her own life after a long struggle with online bullying.