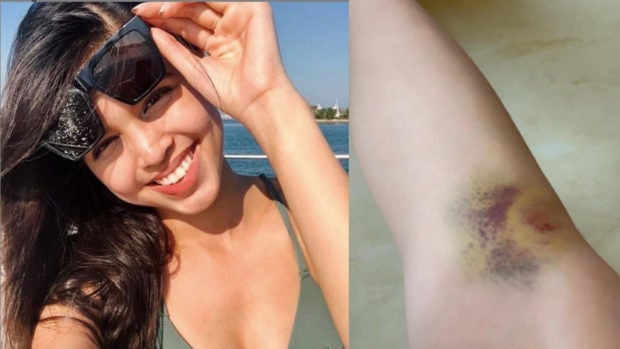 TV host and actress Maine Mendoza got a bruise on her leg after a minor accident while taping for the noontime variety show “Eat Bulaga!”

It happened when Mendoza was sitting on what appears to be the railing of the show’s stairs on set. She began to slowly slide down and fall, as seen on her Twitter page yesterday, June 30. The actress was immediately assisted by the show’s crew and her co-hosts Paolo Ballesteros, Pia Guanio and Jose Manalo.

Mendoza immediately got up after her fall and was met by fits of laughter from her workmates. The actress made light of the situation by turning her fall into a meme.

Mendoza also showed the bruise below her knee after the accident.

The TV show resumed its live studio tapings on June 8, upon the easing of quarantine restrictions in Metro Manila. “Eat Bulaga!” suspended the admission of studio audience last March due to COVID-19.

Ruby Rodriguez discharged from hospital, gets sweet present from son