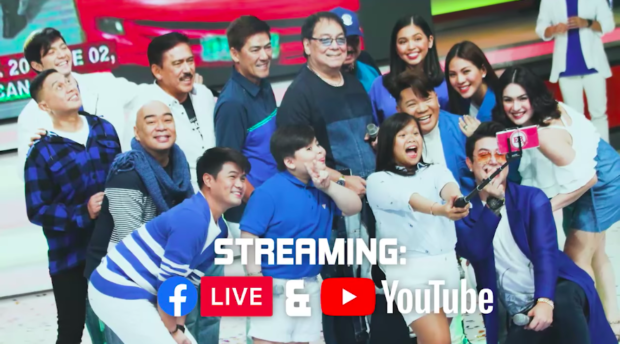 The “Eat Bulaga!” cast will see each other once again onstage. Image: Facebook/@EBdabarkads

“Eat Bulaga!” is set to air live from the studio once again today, June 8.

The noontime variety show put a pause on production to help curb the spread of the coronavirus.

“Eat Bulaga!” announced its return to the studio last night, June 7, through a video on its social media accounts, which showed the APT Studios in Cainta being disinfected.

It encouraged fans to stay home and tune in as the hosts reunite in the studio. However, it did not mention when audiences could return to the studio again.

“Eat Bulaga!” suspended admission of a live audience last March 9 due to the coronavirus crisis.

While in quarantine, cast members such as Joey de Leon, Vic Sotto, Pauleen Luna, Ryan Agoncillo and Maine Mendoza kept fans entertained through video calls with one another posted on the show’s official Facebook page. JB