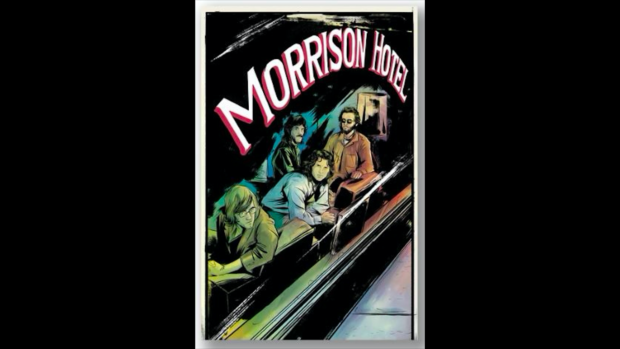 Z2 Comics has announced a new graphic novel dedicated to The Doors, which is entitled “Morrison Hotel”. Image: courtesy of Z2 Comics via AFP Relaxnews

The surviving members of The Doors, Robby Krieger and John Densmore, are collaborating with Leah Moore to chronicle the band’s history in a new comic book.

The “Hotel Morrison” anthology is based on the Doors’ fifth studio album of the same name, which stands out as one of the band’s landmark full-lengths nearly 50 years after its release in 1970.

The 144-page book also delves into the era that preceded the release of “Hotel Morrison”, which was marked by the Vietnam War, the Civil Rights movement as well as the fight for equality of “women, Native Americans, gays, lesbians and other marginalized people.”

“The graphic novel weaves the band’s influence into some of the lore that led to their status as the architects of counterculture, influencing artists, poets, and outsiders for generations to come,” publisher Z2 teased in a statement.

An array of visual artists and illustrators has contributed to “Hotel Morrison”, including Marguerite Savauge, Tony Parker, Christopher Mitten and Vasilis Lolos.

Paul Pope’s protégé and comic book creator, Chris Hunt, has drawn the cover of “Hotel Morrison”, according to Rolling Stone.

“Very few bands have had such lasting importance to American rock history as The Doors, and to be able to work with them directly is unreal. To have been afforded the honor to add to the band’s enduring legacy with their first comic anthology further cements Z2’s status as the premier publisher of comics for music fans, and an honor we don’t take lightly,” Z2 publisher, Josh Frankel, said.

“Morrison Hotel” will be released in comic shops and bookstores across the world on Oct. 13, with a special deluxe limited-edition available exclusively through both Z2 and The Doors’ respective websites.

This deluxe edition of 5,000 copies will come in a slipcase, and will be accompanied by an exclusive 50th Anniversary Edition 12-inch picture disc of the complete “Morrison Hotel” album

Also included will be three exclusive art prints (9 inches x 14.5 inches) featuring images from the graphic novel, as well as a certificate of authenticity signed by writer Leah Moore. JB