From ‘Jute City’ to ‘Almost Paradise’ 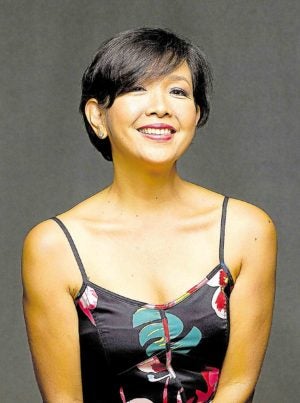 “I was so happy to portray a character that was very different from the usual roles I always get cast in,” the “Miss Saigon” alumna told us. “For a change, I wasn’t playing a mother or a Pinoy character—which is a breath of fresh air for me as an actor.”

Asked how she managed to pull off the convincing Chinese accent, Isay, who originated the role of Gigi (“The Movie in My Mind”) in the Cameron Mackintosh musical, disclosed, “I channeled Michelle Yeoh and how she delivers her lines in her movies. I was told I was the only one who auditioned with an accent.”

Fortunately, it was a risk that paid off beautifully for the seasoned actress. She registered so well in her scenes that we told Isay we’d love to see her engage ex-DEA agent Alex (Christian’s character) in a mano-a-mano if producer Dean Devlin decides to give Season 2 the greenlight—which, for viewers’ sake, he should!

Isay was on the set of “Almost Paradise” from Feb. 11 to Feb. 13 to shoot her scenes, just a few days before the lockdown in Metro Manila was declared.

“Other than the whole Covid-19 scare, the whole shoot was a great experience,” she said. “I shot for only two days, but I was there for about a week. There was a look test and a makeup test for three days. And it felt great to take part in an international production again.”

Yes, unknown to many, Isay was also part of the 1991 Scottish crime drama series “Jute City,” starring dashing David O’Hara, who appeared in high-profile films and TV shows like “Agents of S.H.I.E.L.D.,” “Harry Potter and the Deathly Hollows,” “The Departed,” “Braveheart,” “Luther” and “The Tudors.”

“Before ‘Almost Paradise,’ my last international production was ‘Jute City’ in 1991, while I was still playing Gigi in ‘Miss Saigon’ in London,” Isay told us. “I played Niki, the wife of a Mafia boss. I was able to take some time off from ‘Saigon’ to shoot my scenes in Inverness.

“It was a good thing pinayagan ako to take a break from ‘Saigon.’ That experience in Scotland was memorable and all new to me—I had my own trailer, and skin care and makeup of my choice.”

So, for Isay, it was like going from gangster’s wife (in “Jute City”) to head mobster (in “Almost Paradise”)! But no surprise there. After having worked with the actress in a number of theater productions, we know there’s nothing she can’t do.