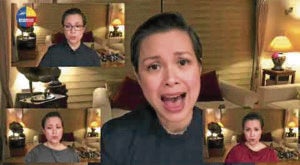 It’s now the first week of June. Folks are slowly going back to work in the industries that are allowed to operate—except, of course, for the live events sector … ours will be the last to get permission, I think.

Here’s hoping that everyone remains safe. The GCQ (general community quarantine) shouldn’t be seen as an excuse for getting back out there for pleasure as the virus remains as strong and indiscriminate as it’s always been.

I’ve been at home for around two and a half months. Rob, our cook Jeany and our driver Alex have been the ones tasked to go out for food and essential supplies, while Nic and I have remained at home. My immune system being what it is after a bunch of antibiotics and one hospital stay, we felt it best to stay safe. I’ve not been able to do anything outside of my home since March 15.

However, that doesn’t mean I’ve been sitting idle and moping.

Over the course of my being homebound, I was determined not to let this time in quarantine be one of inactivity (never mind that my gym shoes haven’t seen much action). I was challenged to learn how to make soufflés, so I did that—in two different flavors.

Then, because of a livestreamed event I was the main participant in, I learned how to use different bits of hardware and software to make things run more smoothly. Also, because my mother very kindly sent my grandmother’s llaneras to my home, I learned how to make leche flan (thanks to Wency Cornejo for the go-to recipe) and meringue cookies (I couldn’t waste the egg whites). Since the recipes were generous, we were able to share the sweets with a couple of neighbors.

Of course, there were also the usual TV series binges, crocheted projects, and curling up to a good book.

Since my industry won’t be open for business until maybe next year, I consider 2020 a bust as far as concerts and live performances are concerned. Save for literally one concert guest appearance and a two-night solo concert gig, my schedule is completely empty. Whatever was there has now been erased, and things have been moved to next year.

So maybe 2020 means something different; if nothing else, the rest of the year will give me time to rest, open up to a new platform, and get excited about learning something I’ve never had the opportunity or desire to learn before.

Sure, there are still chances to sing, for which I will be very grateful, but it also means I have the time to pursue interests that I might’ve thought myself too busy for, and learn other things I’ve not had any time to invest in. So, at the moment, I will not think of this year as the end of the world. Not just yet.

Though it’s over, the work is not done.

Bayanihan Musikahan’s fundraising drive is officially over, which means there won’t be any other home concerts coming up underneath its banner. It’s sad though, but I guess all good things must come to an end.

Over the last two and a half months, Bayanihan Musikahan has raised over P122,000,000 in cash and kind to help our more vulnerable members of society with food and a helping hand.

Although the pandemic and its effects are not over, it’s inspiring to know how much power we as ordinary citizens have in the fight against the coronavirus that causes Covid-19.

To everyone involved with Bayanihan Musikahan, most notably National Artist Ryan Cayabyab for sounding the call, and Trina Belamide, Jay Adlao-Block, Rey Laguda, Dinky Soliman, Dan Songco, Marian Pastor Roces and so many other people for banding together to get all of this done. Around 200 artists, 40 nights of concerts, and over 90,000 families helped. It’s amazing what citizen action can do.