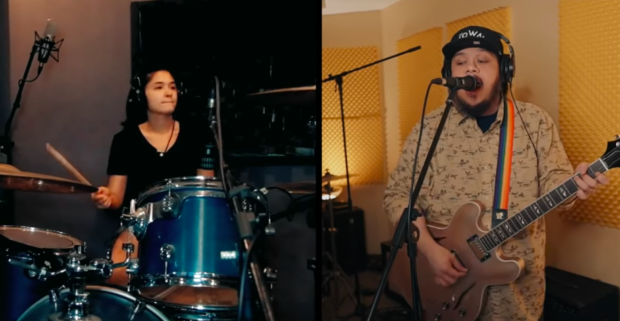 Rock band Mayonnaise and actress Yam Concepcion is treating fans with a cover of a Foo Fighters hit during the pandemic-induced quarantine.

Their collaboration for “Big Me” was uploaded yesterday, May 28, on the official YouTube channel of Mayonnaise, which constantly posts song covers under its “#TBT” series.

(For this episode, we are joined by our friend, who recently celebrated her birthday and is not only an actress but also a drummer for the band Ursaminor, Yam Concepcion.)

Concepcion worked the drum set, while the vocals, guitar and bass parts were performed by Mayonnaise frontman Monty Macalino.

(We decided to play this because one of our favorite bands is Foo Fighters. Another trivia, this is the first song we ever played back in 1996 during our Freshmen-Senior High school dance.)

Concepcion has been regularly posting drum covers on social media. Prior to her cover with Mayonnaise, she posted on May 14 a collab of Nirvana’s “Drain You” with famous 10-year-old Japanese drummer Yoyoka Soma.

Concepcion, who just turned 32 last Wednesday, May 27, marked her birthday by launching her official YouTube channel.

Read Next
LOOK: Charlene Gonzales, Aga Muhlach celebrate 19 years of marriage
EDITORS' PICK
Omicron now shows up in 90% of samples sequenced – Duque
4.7 million Filipinos have received booster shots, but that’s still a ‘low’ number – Galvez
‘Not yet the end’: Lawyer says Marcos Jr’s DQ cases to take lengthy process
Over 3 Million worth of prizes to be won at Smart Padala’s SENDali Manalo Promo!
Acer starts the year off strong with the Aspire Vero National Geographic Edition
The best of bayside and city living at SMDC’s Sail Residences
MOST READ
Drug lord Espinosa tried to escape through air vent at detention facility – NBI
In Batanes, octogenarian dies of COVID-19
When to get boosters after positive COVID test
Marcos Jr. visits Cebu, stands as ‘ninong’ to mayor’s son
Follow @IBiongINQ on Twitter
Don't miss out on the latest news and information.