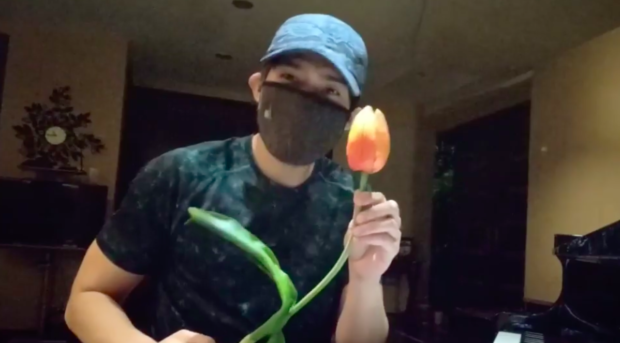 Robi Domingo has decided to serenade the internet with a mashup no one really saw coming: “The Song for My Brother” from hit South Korean drama “Crash Landing on You” and Kim Chiu’s recently released track “Bawal Lumabas.”

The somehow seamless mashup, aptly titled “Classroom Landing on You: Bawal Lumabas,” was played by the Domingo on the piano. He shared with fans his performance on Instagram last Wednesday, May 20.

Domingo donned a face mask while stroking the keys and even offered viewers a flower by the end of his performance, as seen in the video.

The performance has so far garnered over 122,000 views on the social media platform as Domingo is being praised by fans for his musical talent.

Just before posting his mashup, Domingo serenaded fans with a short performance of the hit song “River Flows in You” by famous South Korean pianist Yiruma.

Chiu, meanwhile, has also been lauded by fans and celebrities alike for being able to move on and make light of the harsh criticisms she received for her viral statement, which she has now turned into the said song with the help of DJ Squammy.

Actress Lovely Abella, for one, expressed her support for Chiu by singing and translating “Bawal Lumabas” into Ilonggo, which she also shared with fans on Wednesday.  /ra

WATCH: Robi Domingo plays ‘River Flows in You’ on piano