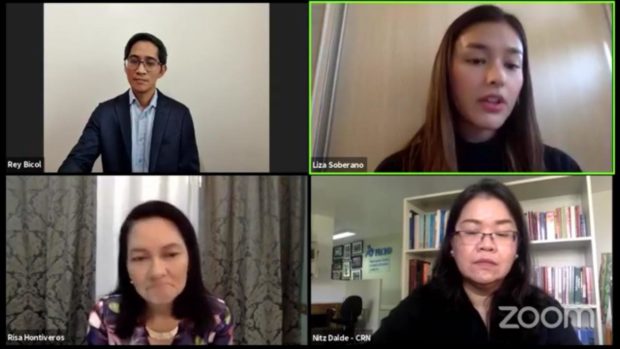 MANILA, Philippines — A tweet by Senator Risa Hontiveros on how social media is being used to sexually exploit children fueled actress Liza Soberano to use her platform against social injustice.

In a webinar tackling ways to end online sexual exploitation of children (OSEC) on Friday, Soberano opened up about feeling a sense of regret for not initially being aware that such abuses are perpetrated on social media and how she could have used her platform to trigger social awareness.

The webinar was organized by Hontiveros and was attended by Atty. Rey Bicol of the International Justice Mission (IJM) and Nitz Dalde from the Child Rights Network.

I am ENRAGED. I saw so many videos online that absolutely broke my heart. An innocent man got shot, a teacher went to jail, and multiple street vendors. Is anyone doing anything about this??? https://t.co/qW9knmcSIE

“I could’ve done something earlier to prevent those from happening by using my platform. Dapat naisip na natin na posible siyang mangyari through those outlets and it could be prevented and we could’ve spread more awareness to our people,” she added.

The 22-year-old actress, who has nearly four million Twitter followers, said that she reported the pages featured in Hontiveros’ tweet but added that while there was “some sense of relief” that she was able to help in her own way, she wondered if it had been enough.

But Bicol said Soberano was able to provide a “very powerful voice in this movement against online sexual exploitation of children.”

He, meanwhile, noted that the government is continuing its efforts to rescue victims through the Philippine National Polices’s Women and Children Protection Center and the NBI’s Anti-Trafficking Division.

Nevertheless, Bicol underscored the importance of the community’s role in the battle against such abuses.

“Malaki po ang role ng community in this fight. Meron po kaming mga kaso na talaga na na aman ng mga pulis because people in the community, like one of church partners, reported about the issue and the police did something about it,” he said.

According to Bicol, OSEC is the “worst form of child abuse” he has encountered in the many years that he has been working with IJM.

“When you say online sexual exploitation of children o OSEC, ito yung live streaming of sexual abuse of children for a customer who is normally in a foreign country, in exchange for money,” he explained.

Bicol said that these crimes are usually facilitated by Filipinos in the Philippines and the perpetrators behind such abuses are “normally” the parents of relatives of the victims.

A study led by IJM, a US-based non-governmental organization that fights human trafficking and child abuse, showed that eight in 10 perpetrators are related to the victims.

The study also stated that the Philippines is a “global hotspot” for OSEC.

“In this age of information technology talagang we’re seeing this high prevalence of internet crimes against children, moreso of internet-based sexual abuse of children,” Bicol said.

“I would say in my years of my work with international justice mission ito yung worst form of child abuse that I’ve encountered  in the field because this involves very young victims. Most of our cases involve children below 12 years old and as I said, ang mga nangaabuso ay mga kamag-anak and sadly yung mga magulang ng mga batang ito,” he added.

Hontiveros, chair of the Senate committee on women, children, family relations and gender equality, said it was important for netizens to use social media to flag online pages that are sexually exploiting children.

“Since netizens use different social media platforms, at alam natin na ironically ito rin ang nagiging daluyan nitong mga krimen laban sa bata, then we netizens using these platforms report the use of whether Facebook or Twitter even Telegram and Whatsapp for these contacts between buyers and sellers of OSEC,” the senator said.

These are some of the Facebook groups and pages that we tracked down. Sa lockdown, parang mas kumalat ang mga online sex…

Posted by Senator Risa Hontiveros on Thursday, May 21, 2020

Hontiveros also called the attention of banks and money sending institutions which she said can be used by perpetrators for transactions.

Soberano said she witnessed how her tweets influenced other people to report social media pages committing these abuses.

“I was told the other day when I was invited to do this webinar  that me voicing out my opinion about the matter has helped in many ways because a lot of people who saw my tweets reacted to it and started reported other pages that are responsible for OSEC,” she said.

“As a celebrity, due to my large following, I realize that I should use my voice for social injustice and I realize that a role of an advocate is to offer independent support to those who feel that they are not being heard or to ensure that action is taken seriously upon these criminals,” the actress added.