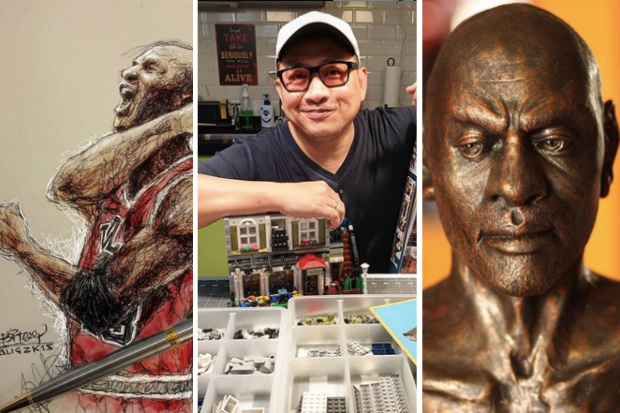 Multi-talented comedian Michael V is once again showing off his artistic prowess to express his admiration for NBA legend Michael Jordan, who was featured in a recently-released ESPN  documentary.

After watching “The Last Dance”, the documentary that chronicles Jordan’s remarkable basketball career, Michael V saw it fit to colorize and reshare one of his old drawings of the NBA legend.

“Just had the urge to colorize and repost this. Michael Jordan IS the G.O.A.T. [greatest of all time] #TheLastDance,” the artist posted on Instagram last Monday, May 18.

Michael V’s now-colorized drawing (the original drawing was made in August 2015) depicts a celebrating Jordan in his Chicago Bulls jersey.

He also shared with fans another artwork he made of the basketball star more than a decade ago, although this time, in the form of a sculpture.

“Can’t get enough of #TheLastDance Netflix series. Reposting this Jordan bust I sculpted around 2009 just because,” Michael V stated on Instagram yesterday, May 19.

Michael V earlier expressed his admiration for “The Last Dance” and wished for a similar documentary to be made featuring another NBA legend, the late Kobe Bryant.

Through his art, Michael V paid tribute to Bryant last January. Bryant perished along with his 13-year-old daughter Gianna and seven other people in a helicopter crash on the same month. JB

Read Next
Star screenwriter struggling with lower-than-expected popularity of Lee Min-ho’s ‘The King’
EDITORS' PICK
Acer starts the year off strong with the Aspire Vero National Geographic Edition
Gear up and get ready to play with Yamaha Mio Gear
PH to import 60,000 tons of fish to cover shortage
Workers are exempted from ‘no vax, no ride’ policy – DOLE chief
Over 3 Million worth of prizes to be won at Smart Padala’s SENDali Manalo Promo!
#VotePH2022: COVID, power woes loom as poll concerns
MOST READ
Guevarra to Acosta: Obey rules on unvaccinated
PH to import 60,000 tons of fish to cover shortage
Emma Stone calls Andrew Garfield a ‘jerk’ after he ‘lied’ about his ‘Spider-Man: No Way Home’ appearance
Cold-case investigation names surprise suspect in Anne Frank’s betrayal
Follow @IBiongINQ on Twitter
Don't miss out on the latest news and information.