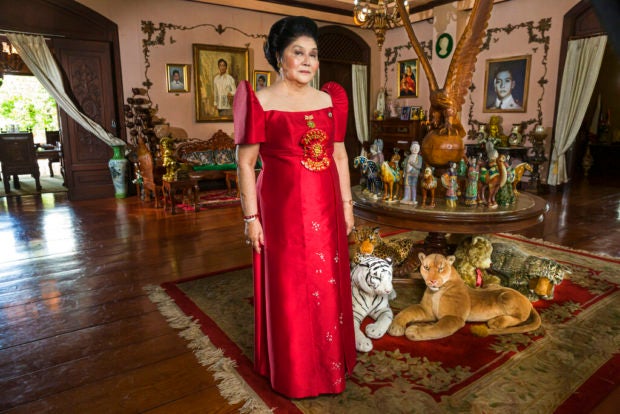 This image released by Showtime shows Imelda Marcos from the documentary “The Kingmaker.” Image: Lauren Greenfield/Showtime via AP

The broadcast of “The Kingmaker,” a critically acclaimed documentary tackling the controversial history of Imelda Marcos, on ABS-CBN’s video streaming service iWant has been postponed.

The delay is due to what the streaming service said is the adjustments in its programming schedule. In a Twitter post on Twitter yesterday, May 15,  iWant said a new release date will be posted on its social media accounts.

“The Kingmaker” was supposed to be made available online alongside another award-winning documentary “Sunday Beauty Queen” on the same day.

We are postponing the launch of "The Kingmaker" due to adjustments in our programming schedule. We will update you on the new release date on our social media accounts. We apologize for any inconvenience because of this change. Thank you and stay safe!

“The Kingmaker” director Lauren Greenfield earlier yesterday revealed that she also just learned of the postponement and that she has made the documentary available via transactional video on demand  (TVOD) service on other platforms.

“ABS-CBN just informed us of their decision to postpone today’s broadcast of THE KINGMAKER on iWant to a later date. As such, we are making the film available immediately on TVOD to all via Vimeo at https://vimeo.com/ondemand/thekingmaker… and on Apple TV at https://apple.co/2WvfsIT,”  she said on Twitter.

ABS-CBN just informed us of their decision to postpone today’s broadcast of THE KINGMAKER on iWant to a later date. As such, we are making the film available immediately on TVOD to all via Vimeo at https://t.co/bEpTduK8cg and on Apple TV at https://t.co/kj3vdpEnTA @Dogwoof pic.twitter.com/Qh1ptZ3yys

“The Kingmaker” chronicles the history of the former first lady of the late dictator Ferdinand Marcos and their family’s rise and fall, as well as their apparent attempt to once again rise in the Philippines’ political sphere.  /ra

Award-winning docus ‘Kingmaker’, ‘Sunday Beauty Queen’ to stream on May 15