John Arcilla, others do 'The Weekend' on TikTok | Inquirer Entertainment 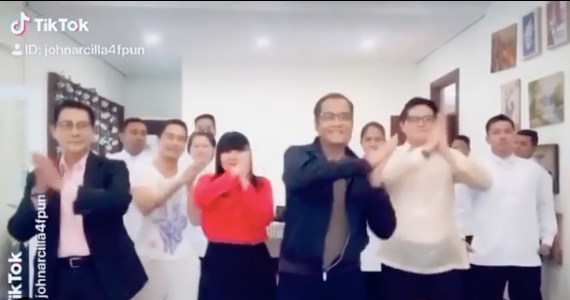 As the video-sharing platform TikTok takes the world by storm, more and more celebrities are joining the craze, and even veteran actors such as John Arcilla are not missing out.

Arcilla was joined by “Ang Probinsyano” co-stars Tirso Cruz III, Lorna Tolentino and Rowell Santiago in coming up with their own take on TikTok’s “The Weekend challenge.”

The actor posted the clip on the video-sharing app earlier today, March 5 and it has so far gained more than 109,000 likes and over 1.5 million views.

“Pampasaya lang po from Team BU-LY (Buwitre-Lily) mula sa Palasyo (Just to cheer you guys up from Team BU-LY [Buwitre-Lily] from the palace),” Arcilla said on Instagram, where he posted the same video. “God bless everyone and [let] us pray for the safety of one another! Maligayang Hwebes po (Happy Thursday)!”

Arcilla, who goes by the handle @johnarcilla4fpun on TikTok, is known for actively producing content on the app. He now has over 802,000 followers and more than 2.3 million likes.