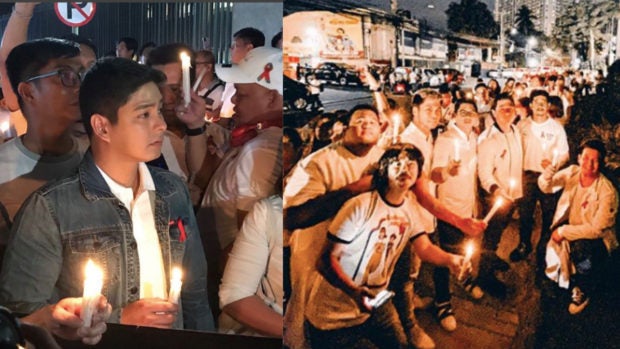 The cast of the hit action TV series “Ang Probinsyano,” led by main actors Coco Martin and Yassi Pressman, participated in the media conglomerate ABS-CBN’s prayer vigil to appeal for the  renewal of its franchise, which will soon expire.

The actors supported their home network by wearing white outfits and displaying a tied ribbon with the media company’s colors blue, green and red, yesterday, Feb. 21. ABS-CBN stars, staff and other employees came together in front of their main building in Quezon City to show their solidarity with the company and to defend the perceived attack against press freedom.

TV host Korina Sanchez took a few snippets from last night’s vigil and placed them in a collage as seen in her Instagram post yesterday. Candles lit the streets beside the network’s building as a sea of employees showed support.

Sanchez called them “heroes” and also used the hashtags #DefendPressFreedom and #YesToABSCBNFranchiseRenewal.

Martin, who plays the main role of Cardo Dalisay in “Ang Probinsyano,” expressed his solidarity in his Instagram post. The action star showed the facade of the media company’s building filled with people, some raising their hands into a fist.

“Hindi ka namin iiwan at pababayaan (We will not leave and ignore you)!” Martin declared.

Actor John Prats also stood beside his fellow stars including Empoy Marquez and Raymart Santiago, among others, while holding up their glowing candles.

Meanwhile, in the House of Representatives, Speaker Alan Peter Cayetano said he would coordinate with the National Telecommunications Commission (NTC) to allow the media network to continue operating while its bid for franchise renewal is pending. ABS-CBN’s franchise is set to expire on March 30.  /ra

WATCH: Yassi Pressman, sisters come together to ‘We Are Family’ as tribute to late father