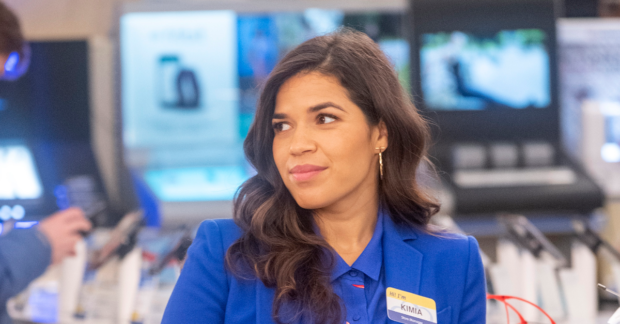 America Ferrera as Amy in a scene from the comedy series “Superstore”. Image: NBC/Ron Batzdorff via AP

“Superstore” is losing its manager — star America Ferrera says she is departing the NBC sitcom after its current season.

Ferrera plays the manager of a big box store in the show, which has already been renewed for a sixth season. The actress also serves as an executive producer on the series and has directed several episodes.

“The last five years on ‘Superstore’ have been some of the most rewarding, enriching and enjoyable years of my career,” Ferrera said in a statement Friday.

The actress became the first Latina actress to win the top comedy actress Emmy Award for her the title role in the series “Ugly Betty” in 2007.

She announced on New Year’s Eve that she is expecting her second child.

“As I start the next chapter for my family and career, I wish only the best, and much-continued success, to my beloved ‘Superstore’ family,” Ferrera said in her statement.

The season five finale will air on April 18 at 8 p.m. Eastern. RGA

America Ferrera Inspires as Astrid in ‘How to Train Your Dragon’ Finale, ‘The Hidden World’