‘Dispatches From Elsewhere’: a crazy real-life ‘game’ comes to TV 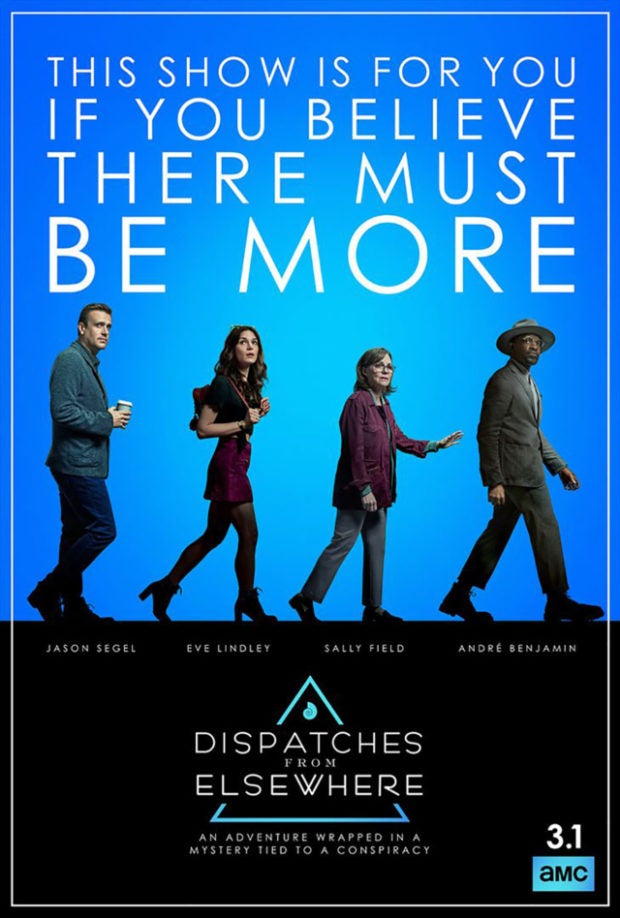 “Dispatches from Elsewhere” is a new series from AMC that is inspired by a true story. Image: Courtesy of AMC via AFP Relaxnews

Is it a giant game for adults organized by a secretive company, or something far bigger? That is the premise of “Dispatches from Elsewhere”, a new series from United States cable network AMC that is inspired by a true story.

Once a classic movie channel, AMC thrived when it shifted its focus to original programming — it is the home of “Mad Men”, “Breaking Bad” and “The Walking Dead”.

Now, it wants to make sure that it remains relevant in a scripted content landscape that has expanded exponentially in recent years.

Like others in the field, AMC is taking a risk on a once-unlikely TV project that will require viewers to invest time and energy to decipher it. So far, “Dispatches”, which debuts on Sunday, is 10 episodes long.

“You couldn’t have done a show like this 10 years ago, but now there are places where this sort of interesting, weird storytelling can find a home.”

As fantastical and surreal as the script seems, the show is based on an actual story.

From 2008 to 2011, in San Francisco, several thousand people took part in an “experience” — as creator Jeff Hull calls it — during which they interacted with a fake company, the Jejune Institute.

While the vibe and the language suggests some kind of cult, Hull was actually staging an elaborate game/art installation, with challenges and tests built-in, which was the subject of the 2013 documentary “The Institute”.

Also starring in the show is its creator Jason Segel, who is best known for his stint on the popular sitcom “How I Met Your Mother”. After seeing the documentary, he bought the rights and developed a TV adaptation.

“It felt like a high-wire act that could go horribly wrong, or go really great,” says Friedman.

It was a fairly significant challenge — those writers are modern-day poets whose work can be hard to grasp.

Indeed, reviews have been mixed for “Dispatches”, even if critics have lauded the effort to take on the daring subject matter.

“I think we’re true to the spirit of the original game, and of the documentary,” Friedman said, adding that the show’s creators had Hull’s blessing.

“You can just watch it as an enjoyable TV show without the background,” he added.

“Dispatches” follows four people who would seemingly never have crossed paths, but they end up in the same game organized by the Jejune Institute in Philadelphia — taking the place of San Francisco.

“I think that’s a huge part of what makes it so human and so relatable.”

Lindley, who is a trans woman, is playing a trans woman character; she says the show’s creators took that on in a “kind of revolutionary” way by not making it central to the story.

“She’s just human. She’s just a girl. And that was something that really excited me about the role. It felt so real,” Lindley said.

For Friedman, the show is a breath of fresh air in “very contentious times.”

“We’re divided into tribes, and on sides. So it’s sort of wanting to create something hopeful in a sense that people from different backgrounds can come together and accomplish something together,” he said.

For Lindley, who describes the show as a “weird ‘Wizard of Oz’ story,” the key ingredient is the focus on human connection.

“Even though… it is something seemingly extraordinary, it is kind of just an ordinary story about ordinary people connecting with each other,” she said. RGA