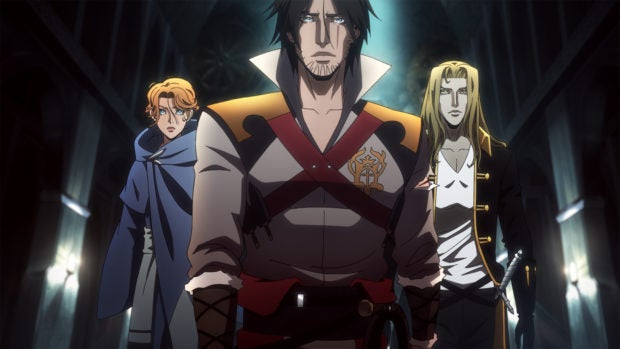 (From left) Sypha Belnades, Trevor Belmont and Alucard in a still from ‘Castlevania’ Season 1. (Image: courtesy of Netflix via AFP Relaxnews)

Season 3 of vampire saga “Castlevania,” based on the video game franchise of the same name, will debut on March 5.

After a four-episode miniseries debut in 2017 and a fuller eight-episode second season in 2018, “Castlevania” will be unfurling another 10 episodes this March.

Set in 15th-century Romania, seasons one and two had followed the intertwining fates of castle-dwelling vampire lord Vlad Dracula Tepes, his half-vampire son Adrian (who sides with humanity) and monster hunter Trevor Belmont.

Political, religious, social and personal limitations came into play as the three leads and their companions struggle for the future of their country and, implicitly, the world.

Though not wholly perfect, the potential of “Castlevania”‘s half-length first season was more
gratifyingly explored in its second outing a year later, retaining its flair for stylish and dynamic battle sequences.

Both seasons were inspired by 1989 video game “Castlevania III,” a prequel to the long-lasting franchise’s first two core games, which featured Trevor’s descendant Simon in a similar vampire-hunting role.

Predominantly taking the form of a two-dimensional, side-scrolling action franchise, 1997 series entry “Castlevania: Symphony of the Night” had an outsized influence on video gaming, especially in conjunction with 1994’s “Super Metroid,” thanks in part to the twin concepts of player freedom and creator direction. Both built on the open-world adventuring of the original “Legend of Zelda” and its sequels.

The franchise as a whole was itself, of course, inspired by Bram Stoker’s classic of gothic horror literature, “Dracula.”

Netflix distributed a 2020 interpretation of the story, a live-action three-parter developed by “Doctor Who” and “Sherlock” pairing Mark Gatiss and Steven Moffat, at the turn of the year.

Its “Castlevania” announcement came the same day that Disney+ outlined an October debut for its second season of “Star Wars” spin-off “The Mandalorian.”  IB /ra

Netflix holds its own in the streaming wars – for now