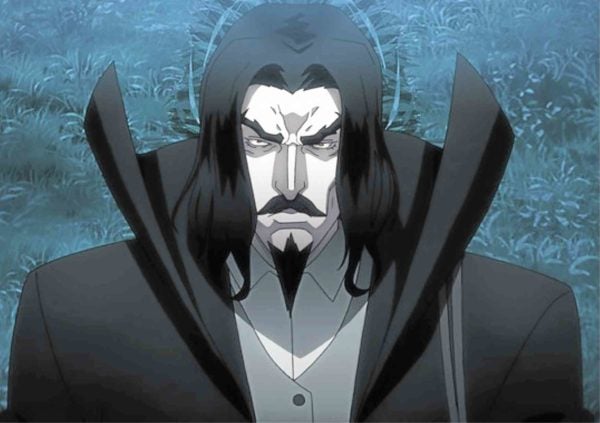 Count Dracula is too late to save the love of his life.

Based on a series of video games from the ’80s, Netflix’s animated miniseries, “Castlevania,” is a dark, gory and sometimes-disturbing adaptation, beneath its generic animé look.

It offers an occasionally unpredictable take on Dracula, a character that continues to be interpreted in pop culture, and one that is closely associated with Young Adult flicks or monster-themed actioners.

Dracula has always been that iconic creature of the night—a character inspired by a historical figure who specialized in impaling his enemies.

Set in the 1400s, “Castlevania” is geared for mature audiences—presumably those that played the games decades back—and benefits from Dracula’s otherworldly blend of mythology and history. But it still adds its own twists.

We see the vampire lord (voiced by Graham McTavish) being visited in his Wallachian fortress by a brave and compassionate doctor, Lisa (Emily Swallow), who is being accused as a witch for her nonconforming ways. Unafraid of the undead being, she asks him for aid, to benefit those in need. Intrigued, he offers his resources at her disposal.

Cut to 20 years later: Still wrongly accused as a witch, Lisa is now bound at the stake, condemned by church officials and suspicious townsfolk, who gather for her public execution. But ever the humanitarian, she deliriously cries for the absent vampire to spare those same people for this transgression. Dracula arrives too late—to save his beloved wife. 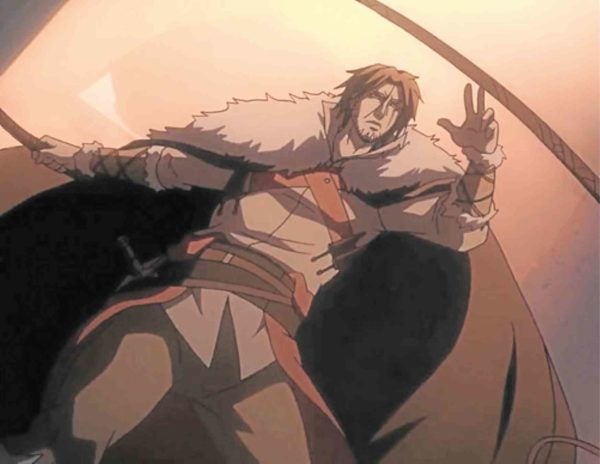 Trevor Belmont is a skilled hunter of monsters.

What follows is a warning: Dracula will have his revenge in one year. The “holy” men and their followers opt to believe that his enraged apparition was a shared delusion—until all hell breaks loose, exactly a year later.

There are still do-gooders in “Castlevania,” however, who stand between the battered denizens of Wallachia and villainous church officials and Dracula’s army of savage monsters. The most important of these protectors is Trevor Belmont (Richard Armitage), a boozing, underestimated outsider who turns out to be a competent combatant.

The conflicts he finds himself in aren’t entirely unpredictable. There are video gamey encounters in the series, fight scenes that feel perfunctory, and creatures that are just there to be trounced by the skilled hero.

Interestingly, though, many of the characters are developed in scenes with prolonged chatter. As for the character designs, they look typically animé, but are given eye-popping, fast-paced choreography. But some prominent characters, like a number of outcast mystics, look drab and could’ve used more unique and fresh-looking duds.

Written by British comic-book scribe Warren Ellis, “Castlevania” manages to shock and repulse, but it’s gripping enough that you would see it through to the end.

Four episodes are too short, especially since an integral figure is introduced in the last part, a cliffhanger! But, as it will have twice the number of episodes next season, it will hopefully reach its much-desired resolution, that eventual climactic showdown with the rampaging Dracula.