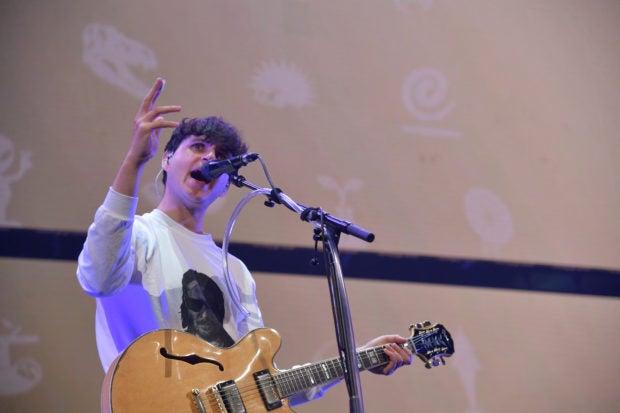 Ezra Koenig of Vampire Weekend on stage at “Not So Silent Night”, a RADIO.COM Event at Barclays Center in New York City. Image: Michael Loccisano/Getty Images for radio.com/AFP

Alternative rock acts Bon Iver and Vampire Weekend will play concerts in support of presidential hopeful Bernie Sanders ahead of the key Iowa caucuses that kick off the long 2020 election season.

Folktronica band Bon Iver will play a rally show on Jan. 31, and the next day Vampire Weekend will jam in support of the leftist Sanders, a self-described socialist candidate popular especially among young voters.

The progressive Vermont senator along with moderate Joe Biden are the frontrunners going into the Iowa caucus on Feb. 3, the first day of primary voting for the 2020 Democratic nomination.

“I believe, unequivocally, that all people deserve support, love, and the freedom to choose how to live their own lives,” said Bon Iver frontman Justin Vernon, a native of the key swing state Wisconsin, in a statement.

“There are promises in our constitutional language that are being superseded by money and greed in this country; I believe that Sen. Sanders is the only one that has the pedigree, the experience, the courage, and the undying spirit to begin to put these obstacles of freedom to rest.”

The bands — both up for major Grammy awards at this Sunday’s gala — also turned out for Sanders’ primary bid in 2016, when he took on the ultimate Democratic nominee Hillary Clinton in a down-to-the-wire race.

This time around Sanders has collected a coterie of celebrity backers, most notably rapper Cardi B, who recorded a campaign video in a nail salon with the senator that touched on raising the minimum wage and canceling student debt. RGA