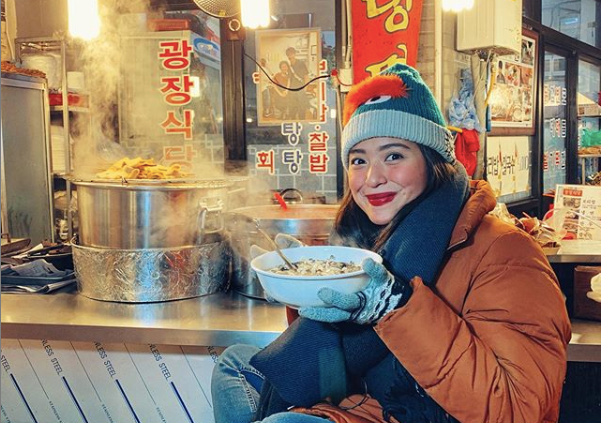 Joyce Pring is spending her holidays a little bit colder, as the television host has jetted off to a chilly South Korea for the first time. She is in Korea in time for the 20th-anniversary celebration of the show she co-hosts, “Unang Hirit”.

Pring arrived on the Land of the Morning Calm on Nov. 29, as seen on her Twitter post on the same day.

The television host first visited the city of Busan and took a stroll around the picturesque colorful houses of Gamcheon Culture Village, an attraction similar to Baguio’s Valley of Colors.

“It’s freezing cold in Busan today. We spent the morning walking around in colorful Gamcheon Culture Village — up and down the hills of the ‘Santorini of Korea’; eating local food, buying trinkets from their shops, and dropping by the 12 different tourist spots in the village!” Pring said in an Instagram post last Saturday, Nov. 30.

Pring went spiritual and thanked God as she reveled in the beauty of Busan’s night sky, a scene she also shared on Instagram on the same day.

“Seeing the moon suspended over the gradient evening sky in Busan,” she said. “The waves hit shore in thunderous, rhythmic crashes – houses lining the edge of this kinetic city.”

“Marveling at my God who holds all these things together. What is man that You are mindful of him? Who am I that You should answer?” she added.

Pring also went to the Korean capital of Seoul, where the actress managed to take a “sun-kissed” photo amid the cold winds.

Quoting one of The Beatles’ famous songs, Pring wrote: “Here comes the sun, and I say, it’s alright,” as seen on her Instagram post yesterday, Dec. 2.

The television host also wasted no opportunity to dress up in the traditional Korean dress hanbok, which she wore while hosting “Unang Hirit” yesterday.

“Stepping into the -1 cold in traditional Hanbok this morning as I hosted live all the way from Seoul for Unang Hirit!” she said.

The cold did not seem to bother Pring, who cracked a joke while braving the freezing “-7 C” temperature of Seoul.

Pring recently went public with her engagement to her “Unang Hirit” co-host Juancho Triviño, who proposed to her on Aug. 3. JB