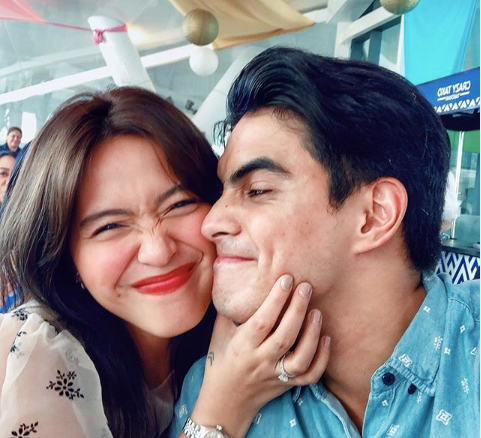 Television hosts Joyce Pring and Juancho Triviño have been quietly engaged for almost four months now, as it turns out. Now, however, Pring has let the public know about their love pact.

Pring said they have been keeping the engagement private, but only now finally decided to share the good news to their fans, as per her Instagram post earlier today, Nov. 27.

“Been enjoying the privacy of our engagement for a while now… but finally decided to share the good news with all of you: God’s faithfulness in full fruition in our lives, intertwined,” she wrote.

Pring said Triviño proposed to her on Aug. 3, when they were in Boracay with family and friends, for her mom’s birthday trip.

“He flew our family, and closest friends, and surprised me with the sweetest pakulo (gimmick), out of all the pakulos he’s ever pulled,” she said.

Pring revealed that despite the engagement not really being a surprise, since they have been contemplating marriage and have even attended pre-marital counseling, Triviño’s proposal still came as a shock — and a pleasant one at that.

“Although we had been praying about this decision for a couple of weeks, and even attended pre-marital counseling in church (more kwento soon), I was still so shocked and started UGLY CRYING on the beach when he kneeled and took my hand and asked me to be his wife,” she wrote.

Pring said that “there have been so many adventures since then,” revealing that they have been fitting wedding dresses, tasting food and planning the wedding all this time.

“I cant wait to gush and share it all with you soon!!! Eto na muna for now… I love you @juanchotrivino,” she said.

Pring and Triviño made their relationship public through a YouTube video the latter posted on May 23 this year. The two have been working together as hosts of “Unang Hirit” since 2018. JB

Read Next
Ronnie Liang fulfills childhood dream of becoming a pilot
EDITORS' PICK
Geek out at TOYCON 2022 powered by Smart Signature
UK’s Boris Johnson will resign, BBC reports
High-risk pregnancy: Reducing your risk is in your hands
House energy committee chair Arroyo bats for cheap electricity
High inflation: Your P1 is now worth only 87 centavos
Unemployment rate up to 6% in May
MOST READ
Suspect in grisly killing of missing woman in Bulacan arrested
Hong Kong suspends flight bans as it eases COVID-19 rules
Kim Atienza’s daughter flaunts bikini body in response to critics of her ‘revealing photos’
Cop slain in Isabela ambush
Follow @IBiongINQ on Twitter
Don't miss out on the latest news and information.