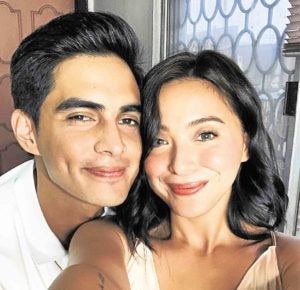 Being in a relationship with someone who’s also from show biz isn’t necessarily easier, says host-singer Joyce Pring.

According to the radio DJ-turned-TV personality, whose boyfriend is “Unang Hirit” cohost Juancho Trivino, it ultimately doesn’t matter whether a partner is from the same industry or not.

“No relationship is easy,” Joyce tells the Inquirer. “Juancho has a lot of good qualities, and that’s precisely why I’m in love with the guy. He has a good heart, he loves his family and friends, and he takes care of them in a manner that I’ve never actually seen before.”

Joyce adds that model-host Juancho, whom she sometimes posts about on Instagram and YouTube, has “a natural instinct for protection” and “loves God.”

As for a nonromantic collaboration, Joyce is still in disbelief over recently working with rock artist Rico Blanco. He worked with her on the jazzy ballad, “Baka Sakali.”

“The experience is amazing. It’s life-changing,” says Joyce, who describes the musician as a former interview subject and one of her idols.

“It’s humbling to see how willing he is to help other people out,” adds the 26-year old, previously the vocalist of a few bands.

By cowriting and producing the song, Rico imparted lessons about the creative process, she recalled, which has further inspired her songwriting.

“Fans can expect me to write and do more music. I created my single not because I wanted to make another stream of income, but because I needed to fuel my heart and express myself. It’s a ‘no pressure’ kind of thing, the same way that I do my podcast,” she says.

The TV presenter previously hosted a radio show for three and a half years, on 89.9 WTM. She is now doing the podcast “Adulting with Joyce Pring,” which streams on Spotify.

Joyce is connecting with people in a different way as part of the weeknight, live-streaming GMA News TV show, “Stand for Truth.”

“This project is different for me because of the interview part,” shares Joyce. “The most difficult part of the job is being able to find a new perspective in every interview that I have … The things you have to be most aware of are the way you present the story and how you give justice to it, because you’re given a limited amount of time.”

While she didn’t have any formal training in hosting—she took up fine arts in college—Joyce proved capable as a radio host, and continues to be receptive to current trends.

“I love reading books, listening to podcasts, watching TED Talks and seeing my favorite hosts (including Ellen DeGeneres and Oprah Winfrey) do interviews,” says Joyce, a former Myx VJ. “I actually learned new tips and tricks that I could use in my own show.”

On her growing online presence—she has over 51,000 YouTube subscribers, 519,000 followers on Instagram and 337,000 on Twitter—Joyce says, “I’m learning that social media is not real life. It’s ‘reel life.’ Truth is, it can be bad for you if you allow it to be. What I’ve learned through social media is, you have to be on top of it and make sure you don’t lose the real life connections that actually matter.”

What’s one of the things that Joyce, who also hosts GMA’s “Kapuso ArtisTambayan,” wishes to achieve with her multifaceted career?

“For people to actually see my life as an inspiration, that they too should not be defined by the circumstances or their pasts,” replies Joyce, whose father is the late Manila cop Joe Pring. “I want to live a life that’s intentional—I want to help the people around me, use my talents and time for the betterment of other people.”