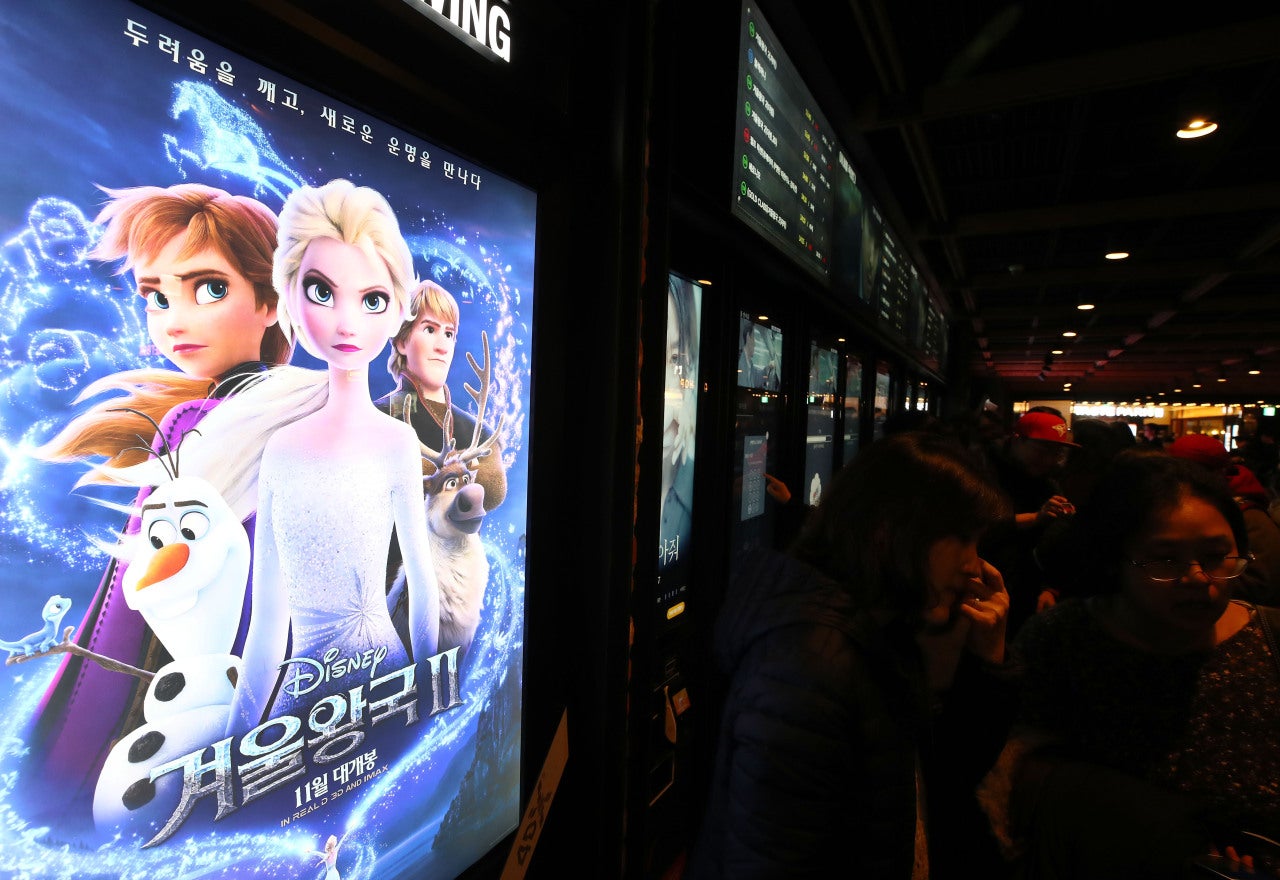 A poster of “Frozen 2” is seen at a multiplex theater in Seoul on Nov. 24. Yonhap via The Korea Herald/Asia News Network

The Public Welfare Committee said the screening of the hit Disney animation film at over 88 percent of screens throughout the country on Nov. 23 violates the country’s anti-monopoly law.

It claimed the film falls under the clause that defines any individual that has over 50 percent of market share as a market-dominant enterprise, and that Disney has “attempted to monopolize the screens and seek great profit in a short term, restricting the consumer’s right to choose.”

Current Korean law on screening of movies has no binding article on the percentage of screens that should be allocated to each film, except for Article 40 that states that each film operator must show a certain percentage of Korean films in accordance with a presidential decree.

According the state-run Korean Film Council (Kofic), the screen-share of “Frozen 2” on Nov. 23 stood at 46.3 percent, not 88 percent. The disparity stems from the fact that the official figure takes the number of times a certain film was screened, and divides it by the total number of times any film was shown, not the number of screens itself, which was cited by the PWC.

For instance, if “Frozen 2” was shown once at a theater with two screens — each of which shows two films — the screen share would be 50 percent by PWC’s calculations, but the official KFC figure would be 25 percent. However, many in the local media and some authorities do use the method used by the PWC to calculate screen share.

There have been films with higher percentages of screen-shares than “Frozen 2.” According to Kofic, “Avengers: Infinity War” marked 46.3 percent upon release last year, and “Avengers: Endgame” this year peaked at 57.1 percent.

The ongoing dominance of big-budget films has sparked controversy as to the possibly of introducing a screen quota that restricts the number of screens that would be allocated to each film.

Upon taking office, Culture Minister Park Yang-woo in April vowed that the ministry would consider the screen quota system for all films, although the government has yet to release any specific plans.

In the same month, Rep. Woo Sang-ho of the ruling Democratic Party of Korea proposed a bill that states the percentage of any specific film being shown at any multiplex theater cannot surpass 50 percent during prime cinema hours — between 1 a.m. and 11 p.m. The bill is currently pending at the National Assembly.

Despite the lack of a bill to restrict what moviemakers are calling “monopolization” and no precedent of any film being penalized for it, film industry personnel have consistently called for some form of screen quota against such blockbusters.

A day after the release of “Frozen 2” on Nov. 21, a local group of filmmakers called for a measure to protect small-budget films.

“The way theaters are is that they only want to avoid being punished by the law. Lawmakers have yet to pass (Woo’s bill),” said director Chung Ji-young, of competing film “Black Money,” at a press conference.