Angeline Quinto slammed a netizen who criticized her for wearing outfits that highlight her breasts while singing on the noontime variety show “ASAP Natin ‘To.”

(Hey angge, if you are going to sing on “ASAP Natin ‘To,” your boobs are already exposed. You are embarrassing! Fix yourself. Is that how a Filipina should be?)

The singer took notice of the remark and did not mince words when responding to the netizen.

Quinto first pointed out how the netizen impolitely addressed her, stating that even her parents do not talk to her in that manner. She expressed the hope that the Instagram user would become a good example to the youth. 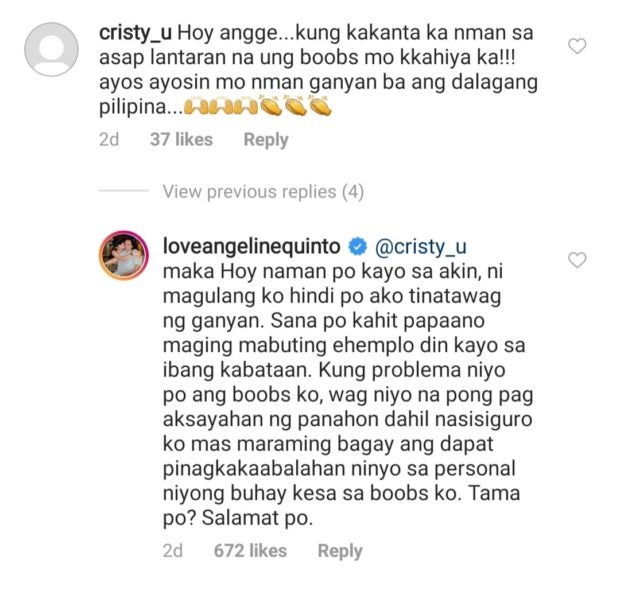 (If your problem is my boobs, do not waste any time [on them] because I am sure there are more things you should be concerned about in your personal life instead of my boobs. Correct? Thank you.)

Quinto previously admitted to undergoing breast-reduction surgery around four years ago, which reduced her breasts’ size from 36-inch Cup D to 36-inch Cup B.

She also pointed out that performing on “ASAP Natin ‘To” contributed to her decision to undergo the said procedure. Quinto cited that prior to the surgery, there were instances that gowns would fit well on her except for her chest area.  /ra

Georgina Wilson slams comment on son’s ‘gay gestures’: ‘Nothing wrong with being gay’