Bianca Gonzalez could not help but fangirl when she met Vice President Leni Robredo during an event at the Marriot Hotel in Pasay city last Tuesday, Nov. 12.

“I finally met Vice President Leni Robredo and the first thing she told me as we shook hands was, ‘I am your fan, and I know Lucia and Carmen!’” the TV host said in her Instagram post on Sunday, Nov. 17. Lucia and Carmen are Gonzalez’s daughters with husband JC Intal.

“Sobrang surreal (So surreal)!!!!! And I can’t believe Ma’am VP said it again on stage and best part is her @bise_leni team captured it on video!!!!” she added.

Gonzalez pointed out that even if Robredo is the Philippines’ highest-ranking female leader, “she is simply a loving mother, normal as normal can be.”

She also noted how Robredo granted selfies on her way out of the event’s venue. When it was Gonzalez’s turn to take a photo with Robredo, she asked: “Sorry I dunno the protocol, allowed po ba ako umakbay (am I allowed to put my arm around you)??”

Robredo laughed, saying that there was no protocol, and told her she was free to do so. Gonzalez also took the time to express her gratitude to Robredo for “your graciousness, your work, and your strength that inspires us.”

Iza Calzado later expressed her surprise at the fact that Gonzalez met Robredo only recently. She also stated that she was a fan of the VP. Robredo then chimed in, and thanked Calzado for her remarks. She added that the honor of meeting Gonzalez was hers. 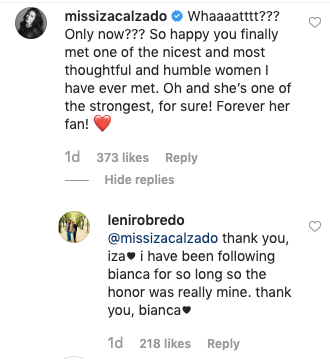 Meanwhile, after a netizen (@tol1212) said Gonzalez has “always been yellow,” the TV host pointed out that she had voted for now House Speaker Alan Cayetano as VP in the 2016 general elections. 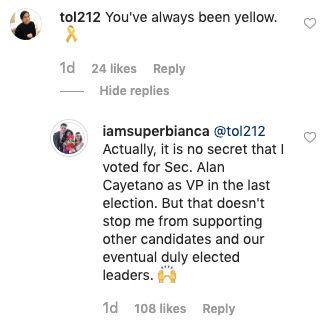 “But that doesn’t stop me from supporting other candidates and our eventual duly elected officers,” she said.  /ra