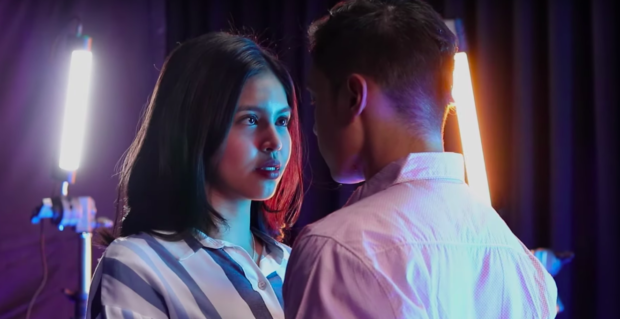 Maine Mendoza waxed nostalgic over her latest movie with co-star Carlo Aquino as she retweeted some behind-the-scenes footage of the film. Apparently, the two stars of “Isa Pa with Feelings” goofed around a lot during rehearsals and in between each take, and there is a video to prove it.

Mendoza expressed her love for the cast and crew, stating that she missed the whole movie’s team, as per her Twitter page yesterday, Nov. 18.

Mendoza was referring to what appears to be her and Aquino’s dance rehearsal for a scene in the movie, as seen on Black Sheep’s YouTube channel yesterday.

Mendoza and Aquino’s bloopers revealed how they practiced their lines and how they were guided through proper use of sign language. The outtakes also showed Mendoza joking around with other actors like Arci Munoz and Rafa Siguion-Reyna.

“Isa Pa with Feelings” is a romantic comedy which portrays a love story between a deaf man and a girl, the two communicating through sign language. The film, directed by Prime Cruz, was released last October. JB

Maine on ‘Isa Pa With Feelings’ costar Carlo: I had a crush on him