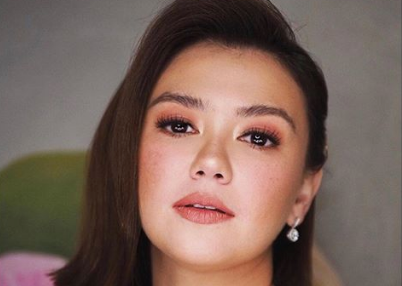 Angelica Panganiban has apologized after posting an “OOTD” (Outfit of the Day) while at the Holocaust Memorial in Berlin, Germany, last Nov. 6.

The Holocaust Memorial, which pays homage to the Jewish victims of the Nazi genocide during World War II, consists of 2,711 rectangular blocks of concrete that resemble tombstones. In Panganiban’s Instagram Story, she can be seen posing in the middle of the concrete blocks, wearing a long black dress and holding up a black umbrella.

“Tabi! Dadaan ang madam (Move over! The madam is going to pass through)!” 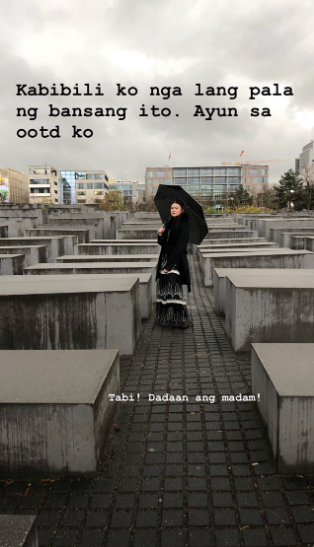 Panganiban’s post drew flak online for its insensitive nature, including FeistyMomma blogger Dexie Wharton who called out the actress on her blog.

“You just can’t take a photo at the Holocaust Memorial while joking that you just bought the country and for an OOTD post, no less,” Wharton wrote on Nov. 6. “Learn the history of places you travel to and be respectful. Even without educating yourself about the Holocaust there’s still a thing called common sense. Not everything is for your selfies, jokes, or outfits. JUST NO! DELETE DELETE DELETE!!”

“While there is no malice and intention to malign and disrespect the memories of the Holocaust, I would like to apologize for offending the sensibilities of others over a picture i posted on my [IG] story,” she said on Nov. 7.

“As I travel, I will be more informed about the history and use this as learning experience to be more conscious on things I  post,” she added in another tweet. “Again, my sincerest apologies.”

Panganiban is currently traveling in Europe and was in Italy the previous week. She landed in trouble while in Rome when she was reprimanded by a police officer for sitting on the famous Spanish Steps, which lead to the Santissima Trinità dei Monti Church. New rules implemented in Rome just this year ban sitting down on the steps, with violators facing a hefty fine of €400 (P22,600).  /ra