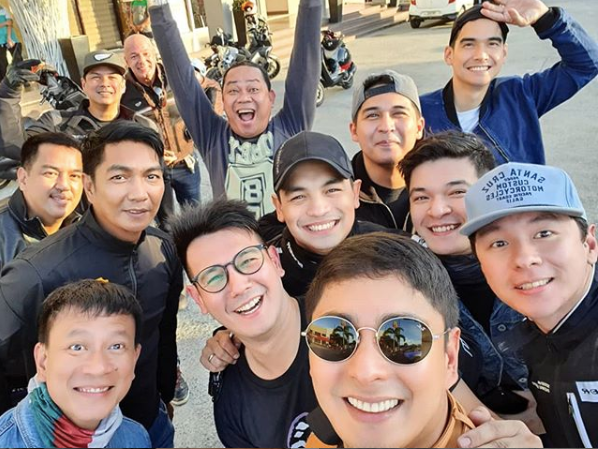 Coco Martin and the crew pose for a groufie. Image: Instagram.com/mr.cocomartin

It looks like Coco Martin and the gang are taking a break from fighting criminals and snuck in a quick weekend getaway in Batangas.

The actor playing the role of Cardo Dalisay, together with his “comrades” from “FPJ’s Ang Probinsyano”, went to the Nayomi Sanctuary Resort in Balete, Batangas to celebrate in advance his birthday, which is on Nov. 1.

Martin, a known motorcycle enthusiast, also shared photos yesterday, Oct. 27, of the gang with their respective rides during the getaway.

It is no surprise that the crew enjoyed their trip, and a clip posted by Martin on Instagram today may just have perfectly captured how much fun the gang has when they are all together. They grooved during a ride, in their own version of the Dura dance challenge.

Another clip posted by Martin, seemingly taken before they went on the road and were still just meeting up, shows the crew having fun as Martin jokes, “Oh yung mga late, alam niyo na! Magpa-gas na kayo!”

Martin shared with fans more photos of the group, out in the sea and wearing their motorcycling gear.

Martin will be turning 38 years old on Friday.

Coco Martin jokes about one millionth episode of ‘FPJ’s Ang Probinsyano’, and not everyone is laughing