Coco Martin jokes about one millionth episode of ‘FPJ’s Ang Probinsyano’, and not everyone is laughing

As the recent episode of action TV series “FPJ’s Ang Probinsyano” showed Cardo Dalisay fighting for his life yet again, Coco Martin joked about the series reaching its one millionth episode.

The episode which aired yesterday, July 17, showed Cardo in the hospital after he was stabbed and shot by Bungo (played by Baron Geisler).

Martin then cracked the joke about the TV series reaching its one millionth episode by 2045, as per his Instagram post on the same day, which has been deleted as of this posting. The post showed Martin transformed into an older version of himself, through the old-age filter of FaceApp.

One commenter, @joanajacob11, praised the TV series and hoped it would last forever. The commenter narrated that her children were crying when they saw Cardo covered in blood in another episode. 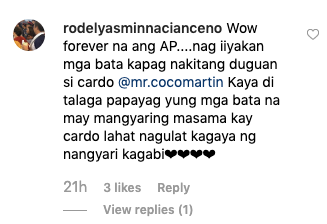 One @iam_gabx24 asked Martin if Cardo can survive after being stabbed three times and shot five times.

Another netizen @rojina_phiexo21_61 compared Cardo to a cat, since cats are believed by some to possess nine lives.

Another commenter, @itsmeihsan_ig, joked that the person destined to kill Cardo is yet to be born.

Some missed out the humor in Martin’s joke and chose to nitpick instead on lapses in the scenes.

One @soundchk123 advised netizens to watch recaps of the TV series since the knife that Bungo used to stab Cardo was not covered in blood.

Martin also received the usual disapproving remarks about the TV series’ seeming endlessness. One @huy.itsmeee begged Martin for the show to not be extended anymore to a millionth episode.

Commenter @jeanettealarde stated that Martin should already rest from the show, and that it already makes her feel like throwing up.