When the Terminator and Conan himself gives you a ballsy compliment . . .

Schwarzenegger is back in “Terminator: Dark Fate” —20th Century Fox

LOS ANGELES—“That was amazing. You have a lot of balls, I can tell you that. I wouldn’t have done that.”

When the Terminator, Conan, seven-time Mr. Olympia winner and former California governor himself recently said those words to me during our interview, he definitely made my day!

I will not reveal what made Arnold Schwarzenegger say one of the most flattering comments I have heard in many years. But you betcha I was grinning from ear to ear.

In Tim Miller’s “Terminator: Dark Fate,” Arnold may be “baaack,” but his aging T-800 is in hibernation and is now selling … draperies. Yes, the formerly menacing robotic assassin is now posing as Carl, proud proprietor of Carl’s Draperies. So our conversation, already memorable with his compliment, continued on a fun note.

It was hard not to grin when Arnold, looking massive in a navy blazer, light-blue gingham shirt and jeans, talked about his relationship to curtains and home decoration in real life.

“Interestingly enough, I’m a little bit of a frustrated decorator,” the “Governator” dished with a laugh. “So I get involved in those things. The way we decorated our house was for certain rooms, I would say to Maria (Shriver, his then-wife), you’re in charge of those, bedroom, her office or whatever, where she felt like she knew exactly the way she wanted it.

“But like with the living room, study and other rooms, I was more involved with that, or in our Sun Valley home. And I really have good taste. It’s always helpful when you have a bit of the European and American influences and a bit of the international.

“I work with decorators well and we go out and pick materials. Those are my lines [in the movie], by the way, just notes written in the script, about the polka dots [on the drapes] and all of this stuff. It just happens to be that they left those lines in the movie, because they wanted to have more of me in the movie than they originally thought.

As Carl, Arnold is a completely domesticated man with a wife (Alicia Borrachero) and a son that he helped raise from the get-go, including changing diapers “without complaining.”

Referring to a line in the movie about being a hands-on dad and husband, the former bodybuilder, now 72 years old, said, “It was a really great line, because he was addressing exactly what most women really like.

“It’s a good characteristic—to be a listener, not just a talker, so it’s something you have to learn. And to understand women and all that stuff. So, Carl was saying, this is why she (Carl’s wife) is with him, because he causes no trouble, and he has learned how to be a good partner.

“Even though they didn’t have a physical relationship, as it was made clear when Linda pointed out that I weighed 400 pounds of metal (laughs) and I would be a little too heavy for most women in any case.”

Also back as Sarah Connor in “Terminator: Dark Fate” is Linda Hamilton. “I was absolutely amazed with the kind of shape she got into, how disciplined she was and how she was still able to pull off being the badass woman,” Arnold praised Linda. “For a woman her age, I thought it was mind-blowing.”

Asked if this latest “Terminator” movie will be his last one, the Austrian bodybuilder turned actor and politician answered with a laugh, “It’s impossible to say today because every single time, I die in a ‘Terminator’ movie. And somehow, they always figure out how to bring me back. So, I have no idea.

But will he be interested in playing the cyborg soldier again? “It’s one of my favorite characters that I’ve played,” replied “Ah-nuld,” who also won the Mr. Universe title at age 20. “Conan the Barbarian, the Twins’ character and the Terminator are my three favorite characters.

“The Terminator is definitely a very important character for me. That was what helped my career take off. I was very fortunate that Jim Cameron had actually insisted on me playing the Terminator.” 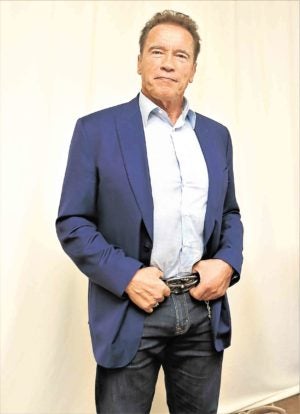 This latest “Terminator” installation marks the return of creator James Cameron to the franchise. James cowrote and produced “Terminator: Dark Fate,” the first time he was involved since “Terminator 2: Judgment Day.”

On whether he and Sylvester Stallone, his action star rival in the ’80s and ’90s, hang out together, Arnold said, “Yes. We didn’t like each other for a long time. Throughout the ’80s, we fought all the time.

“We were trying to outdo each other—who is using the biggest guns in the movie, who is using the longest knives, who is killing more people in a movie (laughs), who is making more money at the box office. It was crazy.

“But, as we said, in the end, I inspired him, and he inspired me. We made each other competitive. It was very helpful in that regard.

“Eventually, we became friends and the stupidity and the way we treated each other are gone. Now, we have a chance to just hang out and appreciate each other’s families, talk about family life, what it’s like, because he’s raising these beautiful kids and he has a wonderful relationship with Jennifer (Flavin), his wife.

“And he has the same concerns that I have. We’re talking about what that is like when you get older as an action hero. Yes, we have wonderful moments.

“There is a lot of people who have offered us to go on a Sylvester Stallone and Arnold Schwarzenegger kind of road show. Instead of a one-man show like Mike Tyson does, we do a two-man show, and do funny things.

“I think he’s much more complicated (laughs) and so the way we look at fashion is different. We’re different in many ways. There’s something very funny in that, and people picked up on that. So, we’re thinking about that show, actually.”

“No, because what I would like to do [run for President] is not available, because I was not born in the United States,” Arnold answered about the possibility of him running for public office again.

“I’m not a political hack who just likes to be involved in politics, because politicians normally only have one interest, and that is to protect their job. Nothing else.”

Instead, Arnold is focusing on policymaking to seek resolutions to the challenges communities face in several areas, including education, energy and development, and political reform.

“I’m passionate about policy because I feel that this is really what helps people,” he stressed. “That’s why I created the USC Schwarzenegger Institute at USC [University of Southern California].

“It’s where we continue with policy work, doing studies on how to get rid of gerrymandering in America. Or how to create a better environment that is cleaner and where we get rid of greenhouse gas emissions and all that, how we can create true immigration reform, build infrastructure, those kinds of things that politicians have promised for the last 20, 30 years and cannot deliver.