Have a nice bonbon 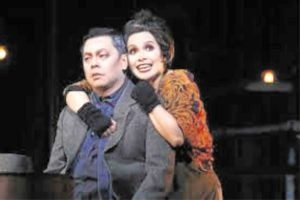 Jett Pangan (left) and the author in “Sweeney Todd”

Oh, how sweet this time away from work feels!

As I write this, it is late on Monday evening, after having spent the better part of the day under the covers, emerging only to pick up my daughter from school, then head off to the salon for haircuts (with a quick drive-through stop for some chicken and fries).

By the time we hit Sunday after the long run of tech rehearsals into the first intense weekend of shows, we were running on fumes. It’s nothing short of a miracle that none of us was a giddy mess in the middle of a performance.

There is something to be said though about a company of actors experiencing this kind of show together. You’re shoulder to shoulder, dependent on one another for strength and inspiration. And for laughter.

There isn’t a shortage of comedic talent in the cast of “Sweeney Todd.” From Jett Pangan (Sweeney) to Andrew Fernando (Judge Turpin) to Nyoy Volante (Pirelli… I mean, just read his bio in the souvenir program), there is someone there to make you laugh. And thank goodness for that, too; our exhaustion level this week hit a record-high.

When last I wrote, we were a few days shy of opening night. High-stress environment, lack of sleep, in the effort of getting every single aspect of the production as tight as possible.

By the time we opened, we hit tired; by Sunday evening, we hit dead-tired. We all looked forward to a very restful few days and planned self-care sessions accordingly. Some got massages, others (like myself) went to the salon. It was a stroke of luck that my hairstylist was available and in a branch closer to where I live (he’s normally further away on Mondays).

So, how does it feel now that we’ve cleared that initial hump? Pretty darn fantastic.

Let me be honest though, and say that the stretch from tech to the final Sunday performance was not fun. Tech by its very nature is tedious and tests everyone’s patience, as it becomes less about storytelling and more about our interaction with our new environment. That first costume run-through gets us back to the essentials, but timing feels a little off.

For me personally, it feels like my body is rallying against something unseen and not yet quite understood. However, with each succeeding run-through as new elements are introduced one by one, we start to settle into a groove. And director Bobby Garcia’s prerehearsal note sessions then get shorter and shorter.

On opening night, Bobby’s final note session is less about giving notes and more about making sure each of us in the cast is seen. He pinpoints every member of the company from its lead players to the ensemble, and waxes poetic about how wonderful they are: talented… full of heart… caring… resilient… strong… singular… musical… surprising… grown… stunning… scene-stealing. Words that serve to keep us going, knowing that each of us is appreciated and loved.

And now, we the cast and crew are tasked with the upkeep. Bobby has transferred ownership to us, the company. It’s now our job to take care of this thing, this musical, this radical reimagining of Stephen Sondheim and Hugh Wheeler’s 40-year-old show. We now have the responsibility of making sure our audiences see something special night after night.

It’s Thursday. We’ll be back at the Theatre at Solaire tonight. Time to once again attend the tale of Sweeney Todd.