Why Andrea sees a bit of herself in Seth 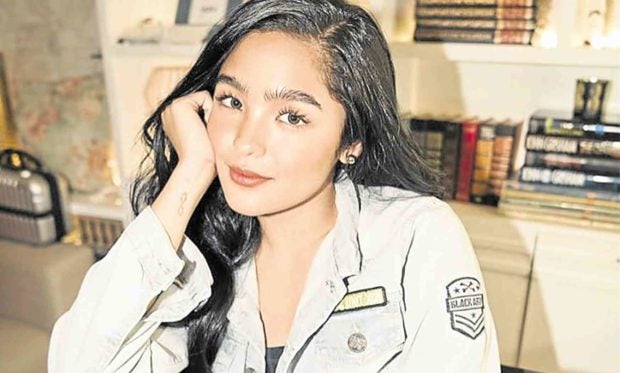 The unexpected success of the soap opera “Kadenang Ginto” has helped ignite a string of career opportunities for teen star Andrea Brillantes: new films, endorsements, a large devoted fanbase—everything she has been dreaming of for years.

And now that blessings are finally starting to pour in, it all seems too good to be true for the 16-year-old star.

“Whatever I have now, I really prayed and worked hard for. My family knows about my struggles … the breakdowns. That’s why I make sure I cherish every blessing that comes my way,” she told reporters at the launch of her upcoming horror flick, “The Ghosting,” which opens in cinemas on Aug. 28.

Andrea, who plays the villain Marga in the said teleserye, is now being dubbed by not a few show biz followers as ABS-CBN’s “Princess of Afternoon Drama.” “I’m flattered that people are giving me that title—it’s a dream of mine to have one,” she said. “Who doesn’t want a title, after all?”

But more than the titles or the material things she’s now able to enjoy, the actress is most thankful for being given a platform to prove her mettle. “Because more people have gotten to see me, they now have a better idea about my acting or what I can do. I feel appreciated,” she said.

Still, Andrea is fully aware that success also comes at a cost. “When there’s more people watching you, of course there will also be more judgment,” she pointed out. “There’s pressure. But like I always say, I will strive to do my job better.”

In “The Ghosting”—produced by Reality Entertainment and directed by Joey de Guzman—Andrea plays Grace, a student who disappears after chancing upon a little girl who takes her to a mysterious red house. “I get approached by a girl, asking me to take her home. But unknown to Grace, entertaining the girl leads to a curse, one that has led to deaths,” she said.

Andrea admitted that she finds doing horror more challenging than drama. She doesn’t scare easily, she said, so she had a hard time conveying the right emotions.

“I had to watch lots of horror movies and think about the things I’m scared of. It’s also tiring because you’re always crying and screaming. I actually lost some weight because of all the running I did. I also had bruises,” she related. “But at the same time, I get to be an action star, in a way. It’s another dream of mine.”

“He’s makulit and very approachable. I love how he treats people on the set. He greets and talks to other talents and workers. I also see how much he loves his family, his siblings,” added Andrea, when asked about the things she likes most about Seth. “I’m a breadwinner, so I see a bit of myself in him, in how he helps his family.”

Andrea would like to work with Seth on a film, given the chance. But she’s also perfectly fine with not having a fixed screen partner. “We don’t want to just rely on a love team,” she said.