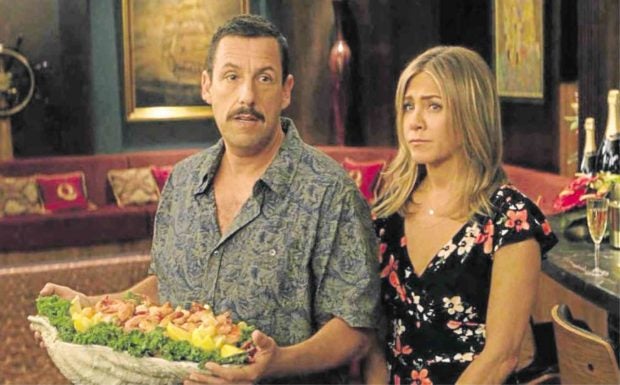 Like a dream pairing from the ’90s, comedian Adam Sandler and sitcom darling Jennifer Aniston collaborate once more—and the resulting reunion project, while not spectacular, is the mild yet satisfying “Murder Mystery.”

Parts rom-com and whodunit, the film streaming on Netflix, as the title suggests, presents a conundrum that its intrepid spouse protagonists must solve.

She’s waiting for him to keep his old promise that they’d go on a European tour, but is starting to think that it may not happen anymore.

Nick surprises Audrey with an unplanned trip to Europe, though, so off they go to take a long-deserved vacation. Sneaking into the swanky business class area of the plane, she meets a charming stranger, Viscount Charles Cavendish (Luke Evans), who invites the couple to be his guests for an event at a relative’s yacht. They refuse, initially, but seeing their chaotic budget tour bus upon arrival quickly changes their minds.

The posh family gathering, it turns out, was planned by Charles’ uncle, Malcolm (Terence Stamp), to declare that his relatives won’t be inheriting anything. He names his lover, Suzi (Shiori Kutsuna)—Charles’ ex—as the sole inheritor of his billions. But as he is about to sign his will, the lights go out, returning abruptly to reveal the old man slain, with a dagger sticking out of his chest.

The attendees, including Nick and Audrey, are shaken by the killing. Nevertheless, the spouses choose to investigate the crime—but are counted as suspects themselves.

Aniston and Sandler, who worked together on the unmemorable 2011 romcom “Just Go With It,” play characters that are more their age—although the actress still miraculously looks like she did during her “Friends” heyday.

Their chemistry works quite believably, making them quite adorable as a longtime couple with corresponding problems and quirks. It’s nice to see Sandler veering away from his usual crazy, babe-magnet dudes, or heroes of rowdy, oft-lowbrow fare, to play a more visibly weary role—a loyal, stingy husband who needs to see a chiropractor.

The mystery itself is quite easy to solve, although there are developments that you won’t see coming. The film by Kyle Newacheck (“Workaholics”), based on the screenplay by James Vanderbilt (“Zodiac”), features a fun and functional cast that also includes Gemma Arterton (the extremely vain actress Grace), John Kani (as the untrusting Col. Ulenga) and Adeel Akhtar (as the “hip” Maharajah Vikram).

Ultimately, “Murder Mystery” may not be spectacularly comedic or suspenseful, but it’s made sweet by the fumbling, nicely aging Sandler and the still-cutesy Aniston.