Kris Aquino on Julia-Gerald issue: Why do we always blame the girl?

MANILA, Philippines — “Why do we always blame the girl?”

This was Kris Aquino’s reaction when asked to request for Erich Gonzales’ opinion on the controversy hounding her friends Julia Barretto and Gerald Anderson, who has reportedly broken up with Bea Alonzo.

“Kris, ask naman Erich about the Julia-Bea feud,” a netizen wrote Tuesday on Aquino’s Instagram photo with Gonzales and family.

“Obviously alam natin mahal ko si Bea but diba unfair to judge Julia because why do we always blame the girl?” she stressed. 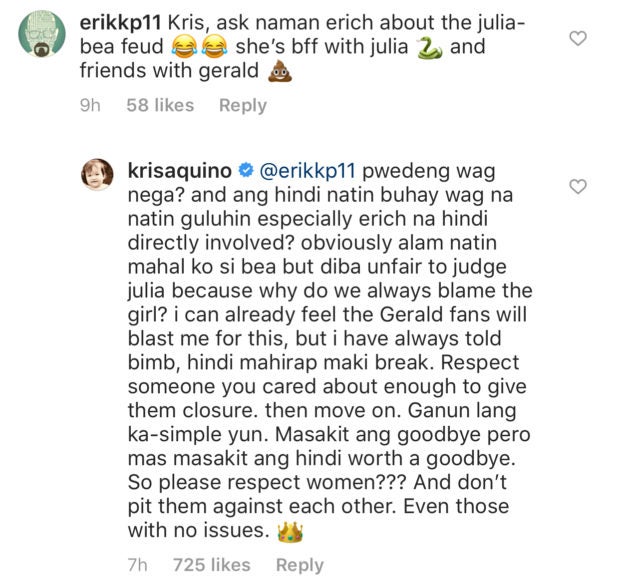 Gerald and Julia, co-stars in movie “Between Maybes,” recently made headlines after Bea hinted at betrayal in an Instagram post.

This was after a netizen posted photos of Julia and Gerald together, supposedly taken during the birthday party of a fellow actor.

While Kris knew Gerald’s fans could bash her for her comment, she also pointed out the need to give someone closure.

“I can already feel Gerald fans will blast me for this, but I have always told Bimb, hindi mahirap makibreak. Respect someone you cared enough to give them closure. Then move on. Ganun lang ka-simple yun,” she said.

“Masakit ang goodbye pero mas masakit ang hindi worth a goodbye. So please respect women??? And don’t pit them against each other. Even those with no issues,” she added.

Last week, Bea revealed the status of her relationship with Gerald: “To my understanding, we did not break up. He just started not talking to me.”

Julia and Gerald, on the other hand, have yet to directly address the issue. /gsg