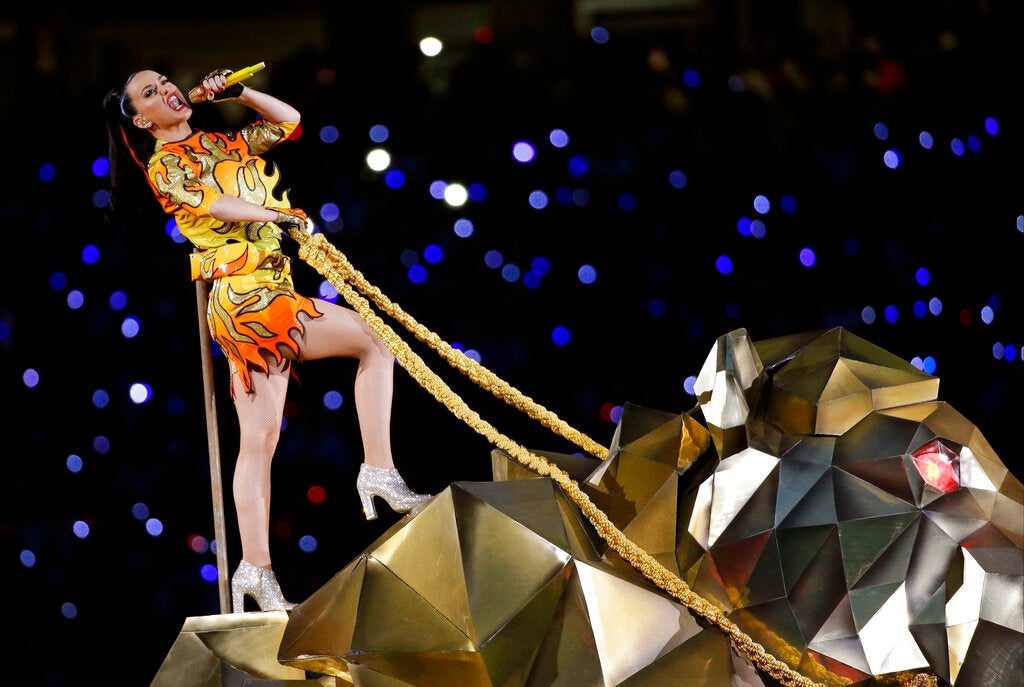 Katy Perry performs during halftime of NFL Super Bowl XLIX football game between the Seattle Seahawks and the New England Patriots in Glendale, Arizona. The penalty phase in a copyright infringement trial will begin Tuesday, July 30, 2019, in Los Angeles and will determine how much Perry and other creators of her hit song “Dark Horse” will owe for improperly copying elements of a 2009 Christian rap song. (AP)

The figure will be a key point of contention in determining how much Perry and her collaborators owe the makers of the 2009 song “Joyful Noise.” Most of the dispute will center on the $31 million Capitol Records received from the song. The label contends that after factoring in costs, its profit was a mere $630,000.

“I don’t want to give away any spoilers here, but some of the costs, get ready to roll your eyes,” said attorney Michael Kahn, who represents “Joyful Noise” artist Marcus Gray.

Capitol Records defense attorney Aaron Wais said during opening statements that the old adage about spending money to make money is true with songs such as “Dark Horse.”

On Monday, a jury returned a unanimous verdict that found the pop hit copied elements of “Joyful Noise,” a song Gray released under the stage name Flame.

“Dark Horse,” a hybrid of pop, trap and hip-hop sounds that was the third single of Perry’s 2013 album “Prism,” spent four weeks atop the Billboard Hot 100 in early 2014. It earned Perry a Grammy Award nomination and was part of her 2015 Super Bowl halftime performance.

While copyright infringement claims are common in music, they rarely result in such losses for high-profile artists.

A jury in 2015 returned a multimillion verdict against Robin Thicke and Pharrell over their 2013 hit “Blurred Lines.” The judgment, which remains on appeal, was in favor of the children of Marvin Gaye, who sued alleging that “Blurred Lines” copied from their father’s hit “Got to Give It Up.”

A 2016 trial over the Zed Zeppelin hit “Stairway to Heaven” ended with a jury concluding that its signature riff did not significantly resemble the song “Taurus,” written by the late Randy Wolfe and performed by his band Spirit. That case is also on appeal.

Jurors in the “Dark Horse” case found all six songwriters and all four corporations that released and distributed the songs were liable, including Perry and Sarah Hudson, who wrote only the song’s words, and Juicy J, who only wrote the rap he provided for the song. Perry was not present when the verdict was read.

Other defendants found liable were Capitol Records as well as Perry’s producers: Dr. Luke, Max Martin and Cirkut, who came up with the song’s beat.

Gray’s attorneys argued that the beat and instrumental line featured through nearly half of “Dark Horse” are substantially similar to those of “Joyful Noise.” Gray wrote the song with his co-plaintiffs Emanuel Lambert and Chike Ojukwu.

Her attorneys argued that the song sections in question represent the kind of simple musical elements that if found to be subject to copyright would hurt music and all songwriters.

“They’re trying to own basic building blocks of music, the alphabet of music that should be available to everyone,” Perry’s lawyer Christine Lepera said during closing arguments Thursday.

The defendants’ musical expert testified that the musical patterns in dispute were as simple as “Mary Had a Little Lamb.”

But the jury of six women and three men disagreed, finding that the bumping beat and riff at the center of “Joyful Noise” were original enough to be copyrighted.

Perry and the song’s co-authors testified during the seven-day trial that none of them had heard the song or heard of Gray before the lawsuit, nor did they listen to Christian music.

Gray’s attorneys had only to demonstrate, however, that “Joyful Noise” had wide dissemination and could have been heard by Perry and her co-authors. They provided as evidence that it had millions of plays on YouTube and Spotify, and that the album it’s included on was nominated for a Grammy.

“They’re trying to shove Mr. Gray into some gospel music alleyway that no one ever visits,” said plaintiffs’ attorney Michael A. Kahn during closing arguments, when he also pointed out that Perry had begun her career as a Christian artist.

Jurors agreed, finding that the song was distributed widely enough that the “Dark Horse” writers may well have heard it.