The Philippines is the latest stop this year of the Irish rock superstar band’s ‘The Joshua Tree’ anniversary tour
By: Pocholo Concepcion - Desk Editor
Philippine Daily Inquirer / 06:28 AM July 31, 2019 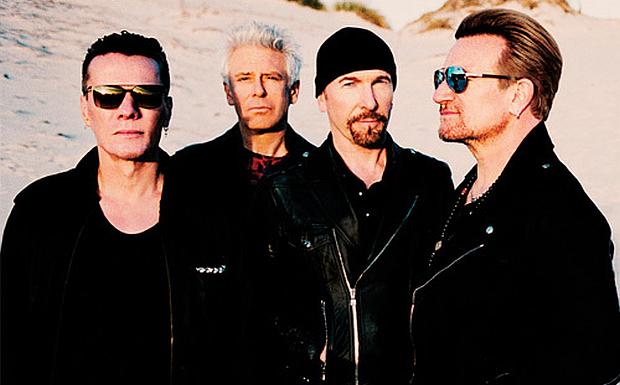 U2 is composed of (from left) Larry Mullen Jr., Adam Clayton, the Edge, and Bono.

MANILA, Philippines — The wait is over.

At long last, Filipino fans of U2 will have the chance to watch the Irish rock superstar band live in concert on Dec. 11 at the Philippine Arena, MMI Live CEO Rhiza Pascua confirmed to Inquirer Lifestyle.

The show stands to be the biggest contemporary music event in the country this year. Recent major concerts here by international acts included Guns N’ Roses’ 2018 performance in the same venue, Coldplay, Madonna, One Direction, Bruno Mars and Taylor Swift at MOA Arena — all produced by MMI Live.

But what makes this U2 concert in the Philippines special is that it’s part of the band’s The Joshua Tree Tour, launched in 2017 to commemorate the 30th anniversary of “The Joshua Tree” album’s release in 1987.

Selling over 25 million copies worldwide and critically acclaimed, “The Joshua Tree” was lauded by Rolling Stone magazine as the record that transformed U2 “from heroes to superstars.”

The tour — which kicked off May 12, 2017 and did 51 shows in North America, Europe and Latin America — has been extended this year, adding 14 shows in Australia, New Zealand, Japan, Singapore, South Korea, and the Philippines, a wonderful Yuletide treat for U2 fans here.

Up until a few years ago, the possibility of U2 playing in the Philippines seemed remote. In 2016, the Inquirer, quoting a MOA Arena official, reported that a promoter had booked the venue for February 2017 for a U2 concert. It did not push through.

The “Joshua Tree” album is significant for two reasons.

First, it yielded three hit singles, “With or Without You,” “I Still Haven’t Found What I’m Looking For,” and “Where the Streets Have No Name”—the first two have, so far, been U2’s only no. 1 singles in the US. The album won two Grammy Awards, 1988 Album of the Year and Best Rock Performance by a Duo or a Group.

Second, the reviews of the album were glowing. Robert Hilburn of the Los Angeles Times said the album “confirms on record what this band has been slowly asserting for three years now on stage: U2 is what the Rolling Stones ceased being years ago — the greatest rock and roll band in the world.”

Hilburn pointed out that the band showed “sometimes breathtaking signs of growth” and played more “tailored and assured” music.

Spin praised “The Joshua Tree” as U2’s “first wholly successful album because it finally breaks free from the seductive but limiting chant-and-drone approach of earlier material… There isn’t a bad song on the record… each one has a hook.”

The Boston Globe said, “It’s another spiritual progress report, enwrapped in music that strikes a healthy balance between the lushness of their last album, 1984’s ‘The Unforgettable Fire,’ and the more volcanic rock of the band’s early years.”

In the Philippines, “The Joshua Tree” wound up in the favorite album collection of many music buffs. Its hit singles were on heavy rotation in top radio stations, and other tracks from the album were played at a rock radio station that this reporter had worked in.

Composed of singer, rhythm guitarist and lyricist Bono (Paul Hewson), lead guitarist and keyboardist Edge (David Evans), bassist Adam Clayton, and drummer Larry Mullen Jr., the band changed its named in 1978 to U2. In 1977, it was called Feedback, and then The Hype with three other members.

In 1980, U2 released its debut album, “Boy,” produced by Steve Lillywhite, with a single, “I Will Follow,” emerging as a minor hit. Lillywhite also produced the band’s second and third albums, 1981’s “October” and 1982’s “War” — the latter going no. 1 in the United Kingdom and featuring the politically-conscious hit singles “Sunday Bloody Sunday” and “New Year’s Day.”

The release of its 1984 album “Unforgettable Fire” and the Martin Luther King-tribute single, “Pride (In the Name of Love)” preceded the band’s celebrated appearance at Wembley Stadium in the 1985 Live Aid concerts.

U2 has 14 studio albums to date and has sold more than 150 million records worldwide. It has won 22 Grammy Awards, and, in 2005, was inducted into the Rock and Roll Hall of Fame.

As a band and as individuals, U2 has been involved in human rights and social justice causes, such as Amnesty International, Jubilee 2000, the ONE/DATA campaigns, Product Red, War Child and Music Rising.

Read Next
Zephanie on her toughest competitor for ‘Idol PH’ crown: Myself
EDITORS' PICK
Individuals affected by ‘Karding’ now over 157,000
Newbie gamers are in for a treat with the power-packed feature of vivo Y16
House energy committee chair Arroyo bats for cheap electricity
Bongbong Marcos says PH ‘open for business’ with new Clark Airport terminal
Karding damage to infrastructure at P23M
Reignite your passion with the vivo Y35
MOST READ
LPA enters PAR, may develop into tropical depression
Angelica Panganiban ‘duguan, sugatang mom’ one week into breastfeeding
Soldiers are not errand boys, Tulfo tells defense officials
Charges readied vs gov’t guard with P290-M deposits
Follow @Inq_Lifestyle on Twitter
Don't miss out on the latest news and information.