Angel Locsin appears to have an important message to women who may be struggling in their romantic relationships.

Locsin, known for her strong stand on empowering fellow women, believes that with “a good man,” a woman would know where she stands. The message was seen on her Instagram Stories last night, July 27. 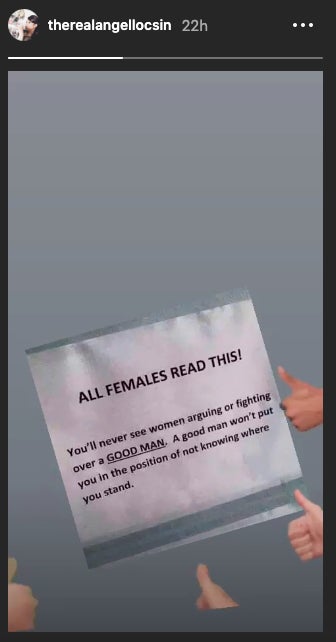 “ALL FEMALES READ THIS! You’ll never see women arguing or fighting over a GOOD MAN,” Locsin said. “A good man won’t put you in the position of not knowing where you stand.”

Locsin was also recently seen replying to her “The General’s Daughter” co-star Paulo Avelino, after the actor posted a question regarding ghosting which intrigued fans last Friday, July 26.

Avelino’s post came after Bea Alonzo recently revealed that her ex-boyfriend Gerald Anderson did not actually break up with her and instead just stopped talking to her. Alonzo made the statement when interviewed by showbiz reporters during a story conference of her upcoming teleserye.

Locsin and Avelino are known to be friends with Alonzo.

Locsin and Alonzo’s friendship go years back, with the two having worked together on the 2013 romantic-comedy film “Four Sisters and a Wedding”. The actresses were also recently seen bonding together along with another friend of theirs, actress Loisa Andalio, as per Alonzo’s Instagram post on June 29. Avelino was also tagged in the said post.

Locsin is reportedly one of the celebrities who have shown support for Alonzo, in light of issues concerning actor Gerald Anderson’s ghosting of Alonzo, and supposed cheating on her to be with actress Julia Barretto. Hannah Mallorca/JB