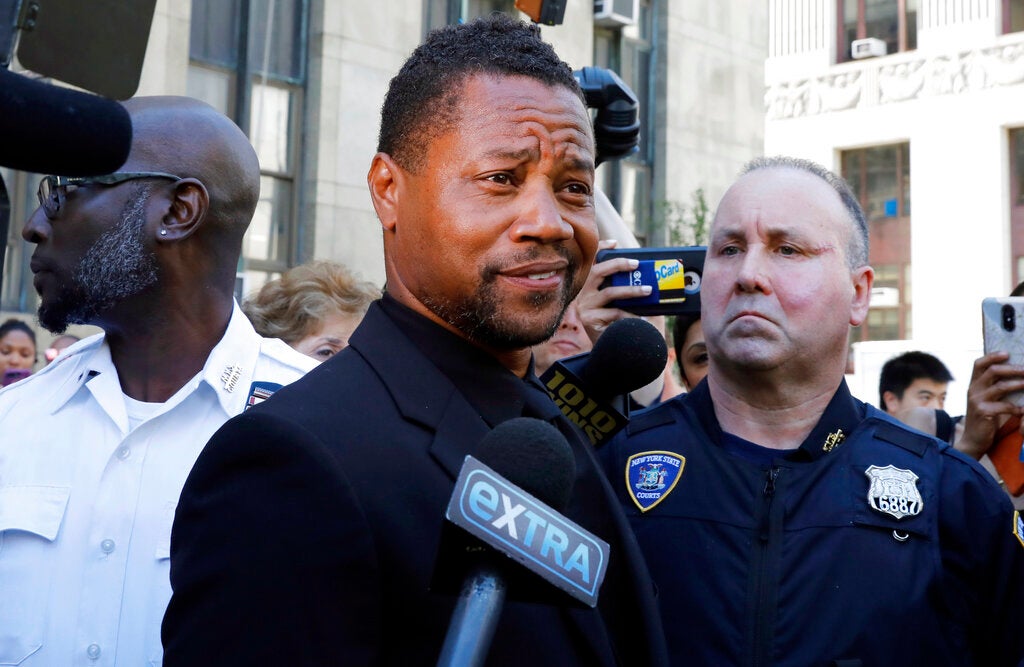 Lawyers for Gooding Jr. are providing a court with video they say will show the actor did not grope a woman at a New York City bar. Image: AP Photo/Richard Drew

NEW YORK — A judge rejected Cuba Gooding Jr.’s bid to throw out his New York City groping case so he can continue working, saying Wednesday that she needed time to review written arguments and didn’t want to make a rash decision.

Judge Keisha Espinal said she wouldn’t rule on the actor’s request to dismiss the misdemeanor case until Aug. 14, dashing his and his lawyers’ hopes of swiftly scotching 2-week-old charges that he grabbed a woman’s breast at a Manhattan bar, which he denies.

The Oscar-winning “Jerry Maguire” star’s upcoming film projects could be in jeopardy if the case drags on and he has to shuttle between his Hollywood home and a Manhattan courthouse for hearings and a trial, defense lawyer Mark Heller argued.

“Mr. Gooding’s life is put on hold. It’s on a pause button,” Heller told Espinal during the 10-minute hearing. “It’s urgent that this matter be dismissed as quickly as possible.”

Swarmed by cameras outside the courthouse, Gooding smiled and nodded when asked whether he thought the case would ultimately be dismissed. He did not comment on the proceedings. Espinal ordered him to return for the August hearing.

As Gooding waited for his ride, a passerby yelled out a remix of his most famous movie line, shouting: “Show us the money, Cuba!”

Gooding, 51, is accused of placing his hand on a 29-year-old woman’s breast and squeezing it without her consent at Magic Hour Rooftop Bar & Lounge near Times Square on June 9. The woman told police she believed Gooding was intoxicated.

Gooding was arrested four days later after turning himself in to police. He pleaded not guilty to forcible touching and sexual abuse charges at a night arraignment and was released on his own recognizance after about six hours in police custody.

He faces up to a year in jail if convicted.

Gooding entered the courtroom Wednesday in dark sunglasses and a charcoal suit and stood between his lawyers in front of Espinal’s bench for the brief hearing.

Assistant District Attorney Jenna Long provided Espinal with a with a two-paragraph deposition in which the accuser affirmed the truth of the details in Gooding’s criminal complaint. The judge gave prosecutors until July 17 to file a written response to the defense’s dismissal motion.

The defense provided Espinal with a copy of security video from the bar the night of the alleged episode — footage he contends will exonerate Gooding. A former New York City police sex crimes detective whom Heller hired to analyze the video concluded it does not show Gooding putting his hand on the accuser’s breast.

The footage, which was obtained and published by TMZ the day of Gooding’s arrest, shows the star putting his hand on or near a woman’s leg and breast as they sit on a couch with his girlfriend between them.

Gooding is then seen pulling the woman’s hand to his lips, as if to kiss it, and leaning toward her before another man steps up and talks with them.

In his motion, Heller also took aim at the accuser’s credibility, saying blog posts she has written portray a woman with a “troubled mentality.”

Heller contends the woman, who has not been identified by prosecutors, wanted revenge after feeling rejected and rebuffed by Gooding and his girlfriend, who asked her to leave them alone after spotting her following them around.

“There are compelling reasons that are screaming out for the dismissal of this case at the earliest stage possible,” Heller told Espinal. NVG