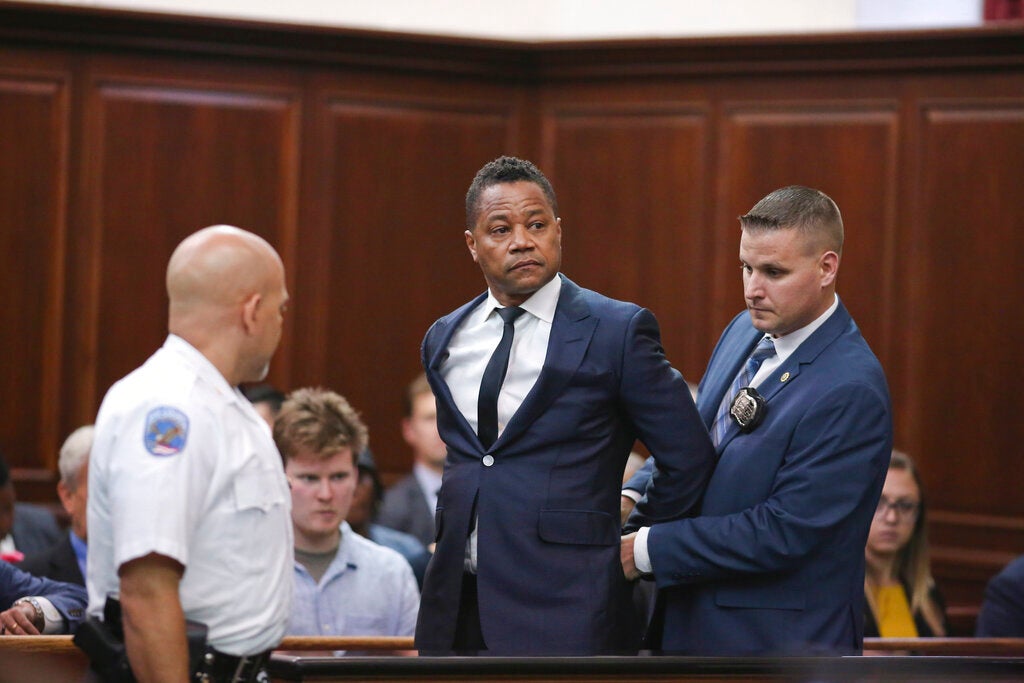 Gooding’s lawyer on Monday, June 24, urged a judge to dismiss the forcible touching case that landed the actor in handcuffs two weeks ago, arguing that witnesses and security video contradict a woman’s allegations that he groped her at a New York City night spot. Image: Alex Tabak/The Daily News via AP, Pool, File

NEW YORK — Cuba Gooding Jr.’s lawyer is urging a judge to dismiss the forcible touching case that landed the actor in handcuffs two weeks ago, arguing that witnesses and security video contradict a woman’s allegations that he groped her at a New York City night spot.

Lawyer Mark Heller is also taking aim at the 29-year-old accuser’s credibility, filling court papers filed ahead of a Wednesday hearing with quotes from what he said are blog posts that portray a woman with a “troubled mentality,” the lawyer said.

Gooding, 51, is accused of placing his hand on the woman’s breast and squeezing it without her consent June 9 at Magic Hour Rooftop Bar & Lounge near Times Square. She told police she believed that Gooding, the Oscar-winning star of “Jerry Maguire,” was intoxicated at the time.

Gooding was arrested four days later after turning himself in to police. He pleaded not guilty to forcible touching and sexual abuse charges at a night court arraignment and was released on his own recognizance after about six hours in police custody.

A conviction in the New York case could put Gooding behind bars for up to a year.

Heller contends the woman, who has not been identified by police or prosecutors, wanted revenge against Gooding after feeling rejected and rebuffed by him and his girlfriend, who asked her to leave them alone after spotting her following them around.

Video obtained by TMZ that the website says is from inside the bar on the night in question appears to show Gooding putting his hand on or near a woman’s leg and breast as they sit on a couch with his girlfriend between them. Gooding is then seen pulling the woman’s hand to his lips, as if to kiss it, and leaning toward her before another man steps up and talks with them.

Gooding’s girlfriend, Claudine De Niro, and a man seen approaching Gooding after the alleged incident said in affidavits filed with Heller’s dismissal motion that they did not see Gooding touch the woman’s breast.

John Baeza, a retired NYPD sex crimes detective hired by Heller to analyze security video of the alleged incident, said in an affidavit accompanying the court papers that he studied the footage frame-by-frame and concluded that it does not show Gooding putting his hand on the accuser’s breast.

Heller said the accuser initially told police she was “partying with Cuba Gooding Jr.” and claimed that Gooding groped her while she was handing him a glass of water, leading to a verbal dispute.

None of that was true, Heller said, and the woman ended up revising her story. He said witnesses who disputed the groping allegations weren’t interviewed by police before Gooding’s arrest.

Summarizing his argument, Heller wrote: “The interests of justice are SCREAMING OUT” for Gooding’s exoneration. NVG