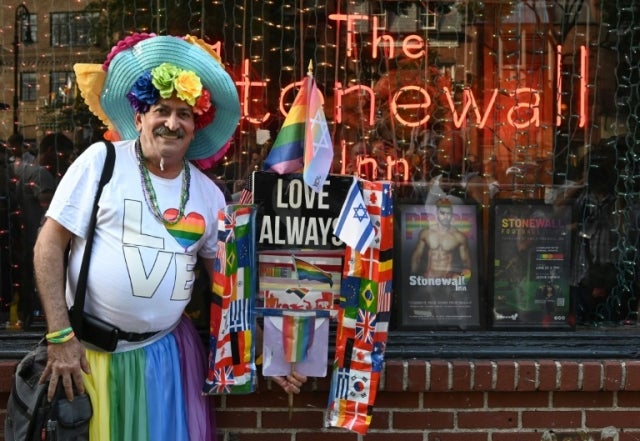 New York is gearing up to welcome millions to its Gay Pride events. Image: TIMOTHY A. CLARY – AFP

Lady Gaga delighted crowds in New York Friday with a surprise appearance at a rally marking the 50th anniversary of the Stonewall riots, as the city gears up to welcome millions to its Gay Pride event that will feature concerts from Madonna and Grace Jones.

“I really, really hope you celebrate every inch of who you are today,” said the pop superstar, long beloved by the LGBTQ community at the bash in Manhattan’s Greenwich Village that featured rainbow flags, drag queens and performances from stars including Alicia Keys.

“You were born this way and you are superstars,” she shouted to applause, referencing the title of her 2011 hit “Born This Way” that has became a gay rights anthem.

Up to four million people are expected to attend the city’s Gay Pride for this year’s milestone anniversary, which comes as critics say Donald Trump’s Republican administration has opened the door once again to overt discrimination.

“I look at the older generation and how you have fought to create a safe, more tolerant space for our youth,” said Gaga, sporting thigh-high glittering rainbow platform boots, denim shorts with rainbow fringe and a rainbow jacket over a black bandeau bra.

“It used to be unheard of to even come out of the closet,” the 33-year-old continued, saying that today many children “are aware of their ability to discover and name their own sexual identities; their own gender identities. They are finding themselves and they are not as afraid.”

“You did that! You created that space,” she said.

Later, politicians—some of them presidential hopefuls vying for the chance to take on President Donald Trump—took to the podium to urge the LGBTQ community to mobilize ahead of the 2020 election.

“Are you ready to keep the flame of revolution burning bright? Because the movement needs to stay alive,” New York Mayor Bill de Blasio told the crowd of several thousand.

“I am the mayor of the largest LGBTQ community on the face of the earth and I am proud of that,” de Blasio said, after taking part in the first Democratic debate.

Senator Kirsten Gillibrand, also running for the White House, said, “We are in a moment in our nation’s history when your voices are needed like never before.”

“If we don’t fight today,” she said, we will lose the progress of the last 50 years.”

“Attacks on the trans community are on an increasing rise each day,” she said. “I will not tolerate this—I know neither will you.”

Admonishing Trump’s White House as an “extremely oppressive administration”, the artist encouraged her audience to “love each other, raise your voice, and, my gosh, vote. Don’t forget to vote!”

“If we keep injecting the world with this message of unity and passion, imagine where we’ll be in another 50 years from today.” NVG

Drag Queen Story Hour: Once upon a time in a bookstore…