Lovi Poe spent a day at the races in the United Kingdom over the weekend along with a dashing date.

The actress has been posting her travels in London since Friday, June 21, on Instagram. On Saturday, she shared that she attended the Royal Ascot, a British horse race held for five days and attended by high society showcasing high fashion.

The Royal Ascot dictates a strict dress code, such as long skirts for women and waistcoats for men. Poe flaunted her backless floral dress, which she paired with a white fascinator.

The “Mulawin vs. Ravena” star also posed alongside Montgomery Blencowe, a film producer to whom she has been romantically linked. Blencowe wore a gray waistcoat and a black hat.

She revealed that she took part in the betting, putting in £50 (P3,270) for a horse named Pinatubo, which paid off.

Blencowe has figured in Poe’s Instagram since January, as she would share pictures of them together during her travels to the United States. He is a British producer based in the US, whose films include Bruce Willis action films “The Prince” and “Marauders.”

Poe has remained mum about their status, although her celebrity friends seem to hint that love is in the air in the comments section of their photo at the Royal Ascot. 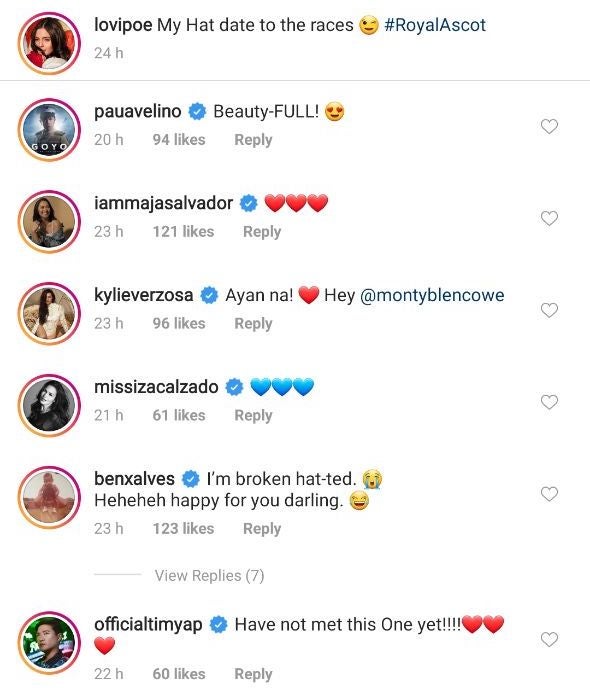 “Ayan na (There it is)!” said actress and beauty queen Kylie Verzosa, while actor Benjamin Alves said, “Happy for you darling.” Actresses Maja Salvador and Iza Calzado both replied with heart emoji.  /ra

LOOK: Lovi Poe gets a surprise from little sister after vacation in US