From their photos online and appearances in public events, Jake Cuenca and Kylie Verzosa by all accounts seem smitten with each other. 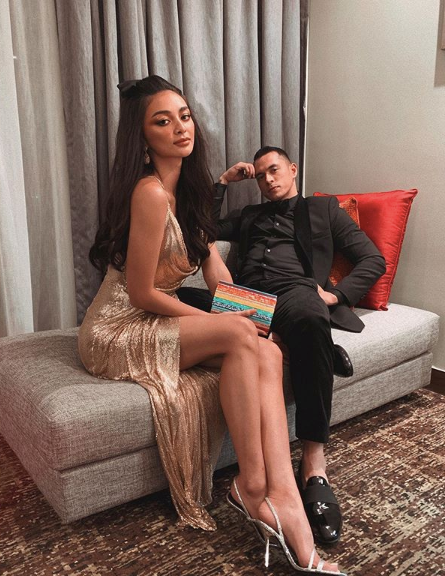 Kylie Verzosa and Jake Cuenca were dates at the MEGA Equality Ball on June 12.  Image: Instagram/@kylieverzosa

The two actors have yet to confirm their relationship, with Cuenca stating during an interview at a press conference for his movie “Kontradiksyon” that he would rather officially announce it together with Verzosa.

He said that he could only officially confirm that he loves her. “I do love her to the bottom of my heart. Mahal na mahal ko siya (I love her so much), this is the happiest I’ve ever been,” he gushed to members of the press, as seen in a video uploaded to YouTube by Rider.ph.

Cuenca said too that he was more prepared for a relationship now. “I’m happy I met her in this time of my life at 31. I’m more mature when it comes to relationships, kumbaga mas disiplinado ako ngayon, mas mature (I’m more disciplined, more mature) and I know [that] I can take care of her.”

“That’s what I work for every day. I want to deserve her every day,” he said.

He noted that he had been focused on his career for the past two years, studying theater in the US, acting in his first play in 2018 and starring in TV shows like “The Blood Sisters” and “Los Bastardos.”

When asked if the beauty queen is the one, he said, “If ako lang papipiliin (If it were up to me), yes.”

He said they have been dating for “about 7 months.” They grew close on the set of “Los Bastardos,” which premiered in October.  Niña V. Guno /ra