Is Kylie Verzosa finally ending speculations about her and Jake Cuenca?

For the first time, the beauty queen and actress posted Tuesday, April 2, on Instagram Polaroid prints of her and Cuenca at a beach.

Cuenca replied to the post with heart emoji, while friends expressed their support for the two.

Fashion stylist Adrianne Concepcion (@adrianneconcept) commented, “Babe! See! So much for being cheated on, right? Look at you! Beyond happy you dodged a bullet.” 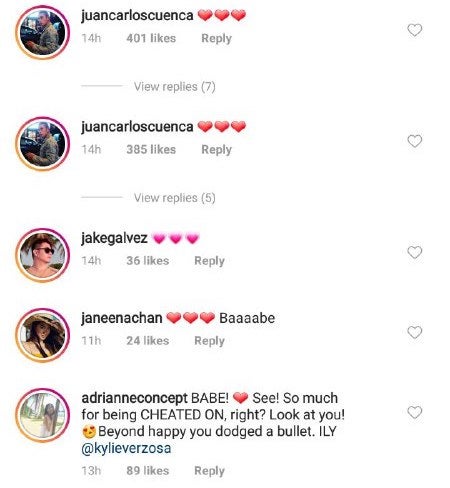 It was not mentioned who the ex in question was, though the Miss International 2016 titleholder previously dated model Laurens Tolenaars.

Verzosa and Cuenca star in the teleserye “Los Bastardos” and have played romantic interests in the show.

Rumors that they were dating began last year when Cuenca began posting pictures of just the two of them.

The two also have videos together over the past few months with Verzosa hanging on Cuenca’s back.

There is no official word from them both, but they do make for a happy—and not to mention attractive—couple.  /ra

LOOK: Kylie Verzosa shares tips on how to overcome depression