Over the weekend, Jake Cuenca made temperatures rise after releasing photos that left little to the imagination.

Cuenca’s pictures, shot by photographer Andrei Suleik, feature him in a bedroom in gray tones. The “The Blood Sisters” actor first teased a picture last Thursday, Oct. 11, where he is seen in a rolled-down army green jumpsuit, revealing his toned body as he lay in bed.

Finally got to shoot with the amazing @andreisuleik ! Just in time for #losbastardos which airs this October 15th. Check out @andreisuleik web site to see the whole spread. 🤫 #andreishotThe Jump suit by @jodinand @pineapplelabph

Another one shows him kneeling on the bed in the nude, his lower body covered only by the grey sheets.

The colored version of the picture shared on Cuenca’s Instagram last Saturday has garnered interesting reactions from fellow celebrities.

Actor Ryan Eigenmann said he would rather see him with pants on, while fashion designer Rajo Laurel gave him a thumbs up and heart emoji.

Others, such as Vina Morales and Meg Imperial, expressed shock. 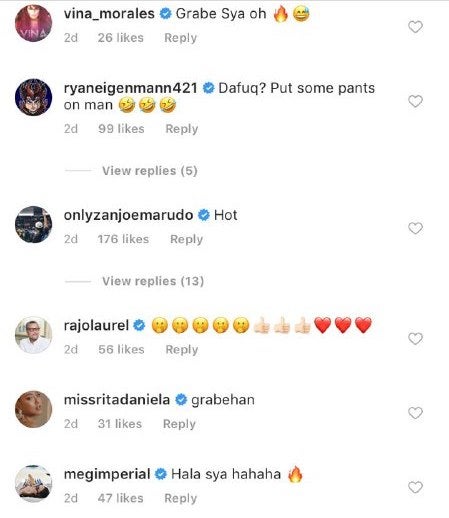 Other photos show the actor only in white underwear while sprawled on a couch. The entire set of photos can be seen on Suleik’s website, www.andreisuleik.com.

Cuenca is among the hunks joining ABS-CBN’s drama series “Los Bastardos”, which follows the lives of five men who share one father and are fighting for his fortune. His co-stars include Diego Loyzaga, Albie Casiño, Josh Colet and Marco Gumabao. The show premieres today, Oct. 15. JB