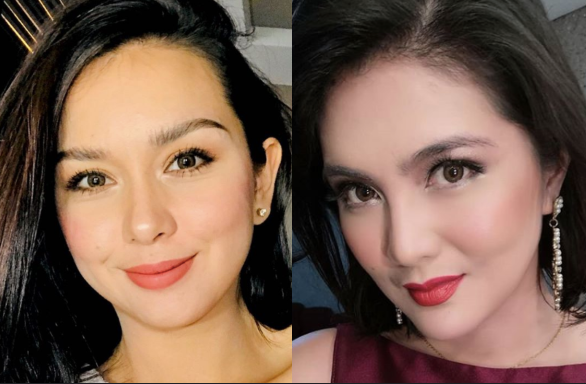 Actress Beauty Gonzalez revealed that she and co-star Dimples Romana stay in different tents to remain in character when taping for noontime drama series “Kadenang Ginto.”

Gonzalez, who plays the role of Romina Mondragon in the show, made the revelation on “Magandang Buhay” on June 18. “Kadenang Ginto” seems to be the turning point in Gonzalez’s 10-year career as an actress, as she shared this is the only time she felt a character of hers became popular and successful.

(It’s a huge thing because for ten years, it is only now that I felt my character really became successful, as Romina Mondragon. I feel that I won a ‘Best Actress’ award only now and I said “wow!” I mean, I’m still floating, it’s still overwhelming and I’m super-thankful because my tenth year is made remarkable by “Kadenang Ginto.”)

She also shared that some of her most intense scenes were the ones with Romana, who plays Daniela, her rival in the show. The two can usually be seen embroiled in the cattiest of fights, from screaming matches to intense hair pulling and face slapping.

(All of my scenes with Daniela… it is as if I still dream about them when I go home because our scenes are intense).

How they make these confrontation scenes real and authentic to their viewers perhaps lies in their curious setup on set. While the two love each other and are pleasant during taping, Gonzalez said she and Romana stay in separate tents so they won’t become close in real life.

“Actually me and Dimples we stay in separate tents and we wanted it that way so that hindi kami maging close in real life. Kasi kung maging close ko siya, maaawa ako sa kanya, makikita sa acting ko na naaawa ako sa kanya, so it’s better na we keep it separate, but we’re good ha,” said Gonzalez. “We really love each other, but we just wanted it to be…  we’re professional in that way.”

(Dimples and I stay in separate tents and we wanted it that way so we won’t become close in real life. If we become close, I would take pity on her and it would show in my acting that I feel sorry for her, so it’s better that we keep it separate. But we’re good, we really love each other, but we just wanted it to be… we’re professional in that way).  /ra

How Beauty makes her marriage work

Read Next
‘Toy Story’ lives on, but should it have?
EDITORS' PICK
Water remains our saving grace right now
The biggest lottery jackpot in the world is $158 million, and even someone from the Philippines could win it
Smart 5G goes live
COVID-19 cases in PH overshoot 122,000 mark
51% of Filipinos think it’s dangerous to publish anything critical about Duterte admin — SWS
PhilHealth mess: Whose heads will roll? Roque says he can’t wait to name names
MOST READ
Captain astonished that his ship delivered Beirut explosive
‘Vexed’: Guanzon raps Topacio over Alzheimer’s remark
Locsin to China: Don’t overinterpret
COVID-19 cases in PH overshoot 122,000 mark
Follow @CCepedaINQ on Twitter
Don't miss out on the latest news and information.