'Toy Story' lives on, but should it have? | Inquirer Entertainment
Close
menu
search

‘Toy Story’ lives on, but should it have? 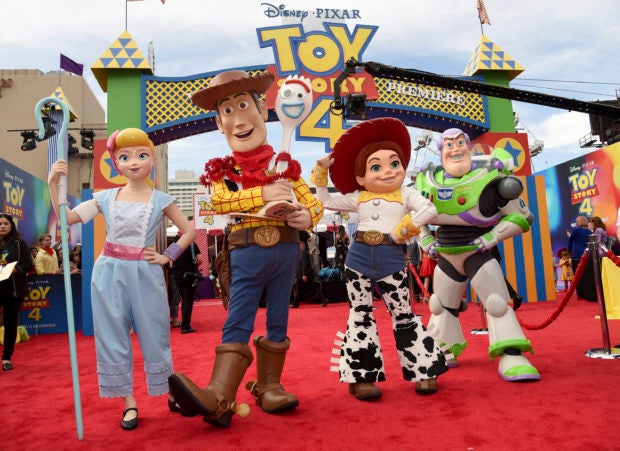 Characters Bo Peep, from left, Woody, Forky, Jessie and Buzz Lightytear pose at the world premiere of “Toy Story 4” on Tuesday, June 11, 2019, at the El Capitan in Los Angeles. (Photo by Chris Pizzello/Invision/AP)

NEW YORK  – Like “Casablanca,” ”Toy Story 3″ concluded with the beginning of a beautiful friendship.

It’s an ending that has very possibly produced an ocean’s worth of tears, not to mention countless awkward moments for children mildly embarrassed by their parents suddenly turning into waterfalls. “Um, dad, it’s a movie about a toy cowboy.”

But the sentimental crescendo of the “Toy Story” trilogy was real.

The films’ young boy, the one whose name was emblazed on the bottom of Woody’s foot, had grown up. Andy was going to college.

The fate most feared by the toys — boxed up in the attic — was miraculously avoided when Andy gifted his beloved playthings to a young girl named Bonnie.

As he drove off, after one last imaginative romp in the yard, Woody watched Andy go like a wistful father.

After three brilliant and heartfelt parenting parables that ruminated on aging, loss and impermanence alongside the pitfalls of arcade claw machines and toddler daycare centers, this was the final goodbye. Goodbye to Andy, yes, but goodbye to childhood. “So long, partner,” said Woody.

The finale was immediately received as a classic Hollywood ending. “The chances of topping this one are infinitesimal,” New York magazine wrote at the time.

“Toy Story 3” won the Oscar for best animated film. Everyone, including the film’s makers and cast, believed they had neatly, perfectly wrapped up their trilogy.

“From the inside, ‘Toy Story 3’ was definitely the end of it,” said Tim Allen, the voice of Buzz Lightyear. “That one scene was it.”

But, of course, that wasn’t it. “Toy Story” has returned, nine years later, with “Toy Story 4.”

In today’s movie business, nothing is safe from ongoing sequelizing, not even a story about the very necessity of letting go and making peace with the passage of time.

That movie franchises have been extended well beyond their natural cycle is nothing new. But “Toy Story 4” may mark when Hollywood officially gave up saying goodbye.

It’s probably a fool’s errand to wish for prudence from a corporate-made, multi-billion dollar property that was, from the outset, designed to sell as many toys as it jerked tears. “Toy Story 4,” which opens in theaters Friday, is widely expected to make around $150 million over the weekend and gross close to $1 billion over its worldwide run, just like “Toy Story 3” did.

And, for some, Woody is again coming to rescue. The Walt Disney Co. release will break a spell of underperforming sequels .

The box office has recently slumped about 7% below last year, partly due to a string of disappointing returns for badly reviewed (or just plain bad) sequels: “Dark Phoenix,” ”The Secret Life of Pets 2,” ”Men in Black: International.”

As Jeff Bock, senior box office analyst for Exhibitor Relations notes, it’s difficult for any studio, even Disney, to leave $1 billion on the table.

“Audiences might not actually need ‘Toy Story 4’ but theaters desperately need it,” said Bock. “It’s very reflective of where we are today with sequels and continuing sagas. We’re at a point where three is no longer the magic number. It’s beyond that.”

It would be an unfair Buzz kill to call “Toy Story 4” simply a blatant cash grab. Quality control is too high at Pixar to give us a “Toy Story” sequel on par with, say, “Jaws: The Revenge,” or something that we collectively pretend never existed, like “Godfather 3.” ”Toy Story 4″ is quite good, critics say . Though many reviewers have questioned its necessity, the film rates 99% fresh on Rotten Tomatoes.

Directed by veteran Pixar animator and first-time feature filmmaker Josh Cooley, “Toy Story 4” finds Woody and the gang now settled in with Bonnie. But Woody slips into another existential crisis of self-worth when Bonnie favors other toys, especially one she quickly crafted herself out of a spork and some kindergarten trash. She names him Forky, a neurotic character voiced by Tony Hale.

When Forky goes missing on a family road trip, the resulting adventure forces Woody to confront the possibility of not only post-Andy life, but post-kid life.

It’s become standard business for franchises to slowly abandon the numbers that might too bluntly remind fans of their lengthy runs.

The “Fast and the Furious” series understandably chose to title its upcoming installment “Fast & Furious Presents: Hobbes and Shaw” over its almost shocking actual numerical value: “Fast & Furious 9.” Pixar, at least, hasn’t shied away from where this “Toy Story” fits in, even if its lead actor would have gone a different direction.

“It really should be called ‘Toy Story: Forky,” said Tom Hanks. “Because it’s all about the Forky.”

Sequels have always been a somewhat touchy subject for Pixar. Since its groundbreaking first feature, 1995’s “Toy Story” (the first full-length computer generated animated movie), Pixar has, for much of its existence, eschewed repetition for originality. In his 2014 book “Creativity, Inc.” , Pixar co-founder Ed Catmull called quality “the best business plan” and suggested sequels can lead to “creative bankruptcy.”

Lately, things have been changing at Pixar, and not just because of a recent preponderance of sequels including “Finding Dory,” ”Cars 3″ and “Incredibles 2.” Former Pixar chief John Lasseter, who directed the first two “Toy Story” films, exited the company last year after acknowledging “missteps” in his behavior with female staff members. In 2017, Rashida Jones departed “Toy Story 4,” which she was helping to write, and said then that the company had “a culture where women and people of color do not have an equal creative voice.”

“Inside Out” and “Up” director Pete Docter, who has a story credit and is an executive producer on “Toy Story 4,” last year took over as Pixar’s chief creative officer. The studio’s next two releases will be originals: “Onward” next March and Docter’s own “Soul,” in June 2020.

And given Pixar’s unique stature as one of Hollywood’s few remaining factories of fresh storytelling capable of reaching mass audiences (its last original, “Coco,” grossed more than $800 million), some are rooting for “Toy Story 4” to — really this time — be Woody’s last go-around. Not because they won’t watch another one, but because they will. In a movie world of endless “Star Wars” episodes and even actors who can be digitally resurrected, closure — the kind preached in “Toy Story 3” — is increasingly a hard-to-come-by commodity. Not everything is meant to keep going for infinity and beyond. /gsg

Read Next
Lawsuit alleges Carrie Underwood copied ‘Game On’ NFL intro
EDITORS' PICK
DOH: Too early to say COVID-19 cases are declining
Acer starts the year off strong with the Aspire Vero National Geographic Edition
Duterte praises military but slams police for poor discipline, corruption
Over 3 Million worth of prizes to be won at Smart Padala’s SENDali Manalo Promo!
COVID-19 cases surging in all regions and provinces, says DOH
The best of bayside and city living at SMDC’s Sail Residences
MOST READ
PBA gets crucial call from GAB for go signal under different setup as reboot of Governors’ Cup could come earlier
Marcos Jr. visits Cebu, stands as ‘ninong’ to mayor’s son
Djokovic has to comply with rules to go to Spain, PM says
Comelec is confident candidates will join debates, says spox
Don't miss out on the latest news and information.