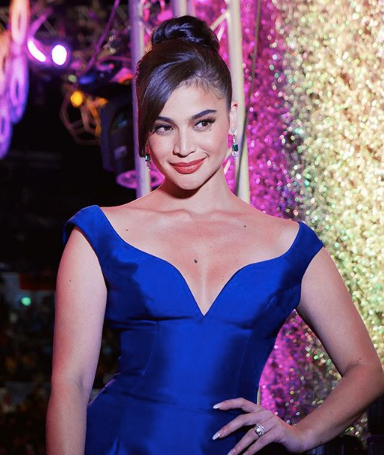 Anne Curtis looked just as queenly as the Binibining Pilipinas 2019 beauty queens when she recently hosted the pageant with Richard Gutierrez and donned not one, but four ensembles for the occasion.

Curtis started off the night with a dramatic blue gown by none other than Dubai-based Filipino fashion designer Michael Cinco.

The designer himself described Curtis’ first gown as a “couture fully embellished blue Michael Cinco gown with a dramatic tiered train.” Curtis was also styled by Liz Uy’s Stylized Studio throughout the night.

“Girls Just Wanna Have Fun,” said Curtis as she shared a video of her romping around in her fun and lively outfit on stage.

Leyva shared a photo of Curtis wearing the stunning gown backstage and called the actress-host his “forever stunning #dyosa muse.”

Curtis’ fourth and final gown, which she wore during the crowning of the new Binibining Pilipinas queens, was a navy-blue Michael Cinco gown reminiscent of old Hollywood glamour.

“Promise last na to,” said Curtis in jest. “Thank you #BbPilipinas2019 for having me as your host this year and congratulations to all the beautiful ladies.”

This is not the first time Curtis went through lavish outfit changes for a special occasion and it seems it won’t be the last. Curtis underwent numerous costume changes during her concert at the Smart Araneta Coliseum last August 2018 and saw her don the creations of Filipino and foreign fashion designers alike such as Michael Ngo, Kiminte Kimhekim, Furne One Amato, Boom Sason, Augusto Manzanares and Neric Beltran.  /ra

Read Next
FDCP taps young filmmakers to join ‘Sine Kabataan’
EDITORS' PICK
Over 3 Million worth of prizes to be won at Smart Padala’s SENDali Manalo Promo!
Comelec division junks petition to cancel Marcos COC for president
Acer starts the year off strong with the Aspire Vero National Geographic Edition
Marcos camp ‘extends hand of unity’ after COC cancellation bid is denied
The best of bayside and city living at SMDC’s Sail Residences
PH logs 37,070 more COVID-19 cases; over 33K others recover
MOST READ
NBI foils escape attempt of Kerwin Espinosa, two others
Comelec division junks petition to cancel Marcos COC for president
Francine Diaz’s manager denies actress is being courted by Seth Fedelin
‘Not my loss’: Did Kris Aquino just comment on her breakup with Mel Sarmiento?
Follow @CCepedaINQ on Twitter
Don't miss out on the latest news and information.