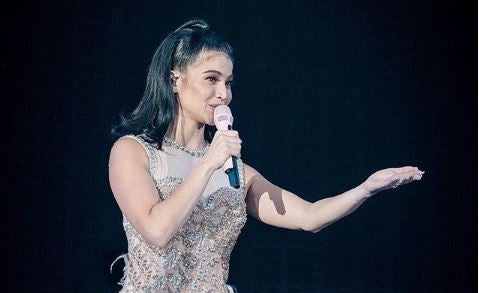 Anne Curtis totally went all out for her last concert, “AnneKulit,” held last Aug. 18 at the Smart Araneta Coliseum. The concert marked Curtis’ 21 years in the entertainment industry, celebrating with her manifold fans the feat she has achieved in her career.

Singer or not, it’s palpable that Curtis knows how to put on a good show. And if there’s anything she’s not, it’s being simple. Her concert outfits alone were a definite feast to the eyes. She went through numerous costume changes throughout her performance,  making sure all eyes were on her.

Curtis took to her Instagram last Aug. 21 to give a rundown of all the outfits she wore, paying homage to all the designers and stylists who created and curated the masterpieces she wore. The photos Curtis shared on her Instagram were captured by lifestyle photographer Magic Liwanag.

For her opening costume, Curtis went for a custom-made attire of glitter knee-length heels, a short skirt and a shiny silver bomber jacket. Inside, Curtis wore a Swarovski-studded bralette. The ensemble was from Dolce & Gabbana and The Blonds, and styled by Pam Quinones of the Qurator Studio.

“For my opening I wore custom @theblondsny and @dolcegabbana. Going for that disco tech look!” quipped Curtis.

Curtis eventually took off her jacket to reveal the Swarovski-studded bralette she was wearing inside.

Meanwhile, for her K-pop number, Curtis went for a playful look by changing into a glittery pink PVC bralette and skirt. The ensemble was styled by no other than Liz Uy of Stylized Studio.

Curtis dropped the playfulness and went for a sporty look in her next outfit, another custom-made ensemble by Los Angeles-based fashion designer Michael Ngo.

The outfit featured baggy wide-legged sweatpants with a silver sheen, including little accents such as having the name “Anne” and the number “21” printed on the side of the legs. She paired this with a black-and-silver crop top that bore the huge number “21” on the front, signifying Curtis’ 21 years in show business.

“Cyber sporting it in custom @imngo. Thank you Michael! Loved this,” wrote Curtis on her Instagram.

“90’s denim date,” Curtis wrote in her post as she shared a picture of her in her denim attire. She wore denim thigh-high boots, denim shorts, and a strapless denim top that flared in the back.

“Couture @main_kimhekim from top to toe!”

Curtis went back to spark in her later outfits. In another post she shared of her, Curtis can be seen wearing a blush-pink one-piece ensemble featuring a studded front and feathers circling the hips—a lush creation by designer Furne One Amato.

“The greatest ShowmANNE in @furneamato. Thank you Madam,” Curtis wrote.

Curtis, too, wore a Boom Sason custom-paired with black Gianvito Rossi boots.  Curtis’ Sason ensemble featured a sparkly cropped tube top and a glittery long skirt with a high slit on the left side.

“O DIVA? Sparkling in @manzanaresny for my closing number.”

But before her closing number was unveiled, Curtis paired the Manzanares one-piecer with a Neric Beltran skirt, which gave her an immaculate bridal look.

“Before that I wore a @nericbeltran skirt for a very special surprise video mapping number,” wrote Curtis.

The video featured her and husband Erwan Heussaff in the backdrop, with wedding filmmaker Jason Magbanua at the helm.

“Shout out to @jasonmagbanua for again, capturing our magical moment,” Curtis said in gratitude.

It’s known that Magbanua is also behind the video of Curtis and Heussaff’s wedding in New Zealand in November 2017.  /ra