LOS ANGELES — “Late Night,” a new comedy from Mindy Kaling, establishes itself as a fantasy from the outset. It’s about a veteran late-night talk show host who is a woman, after all.

Emma Thompson plays said host, Katherine Newbury, who decides to allow the hire of a very green, but very eager newcomer, Molly (Kaling) to her all white and male writing staff. It scored a record acquisition at the Sundance Film Festival earlier this year and opens in select theaters Friday and nationwide June 14.

The Associated Press spoke to Kaling and Thompson about the film, which explores serious issues like gender bias, “diversity hires” and the grueling demands of late night with enjoyable comedy drawn from real-life stories of difficult TV bosses. Remarks have been edited for clarity and brevity. 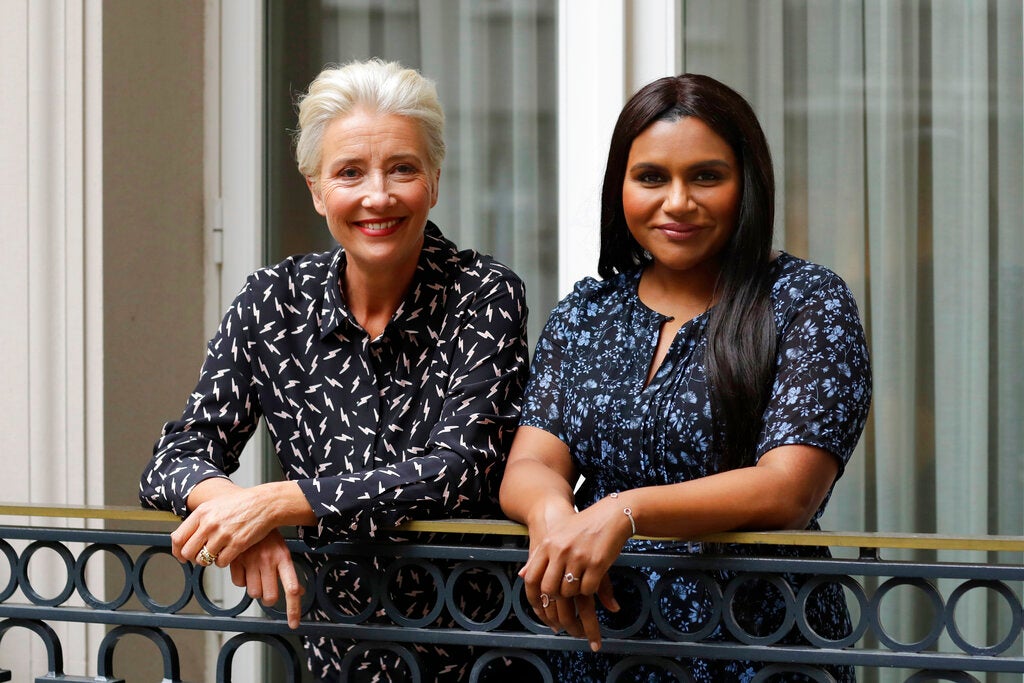 AP: Why did you choose the setting of late night talk shows?

KALING: I’ve always been intrigued by late night TV. I write for scripted half-hour shows which you’d think would be so similar that I would know this world, but it really is its own beast. It’s very tied to New York City, it’s a very masculine environment and the level of hyper-competition in these shows both between the different hosts but also between writers on staff is so different than what I’m used to. I loved shining a light on a world that has historically not employed women. It was very easy to research because almost all of my friends have been fired from a late night talk show. There are so many great disgruntled stories of impossible hosts and mean bosses.

AP: And you wrote the part of Katherine specifically for Emma, having never met her.

KALING: It must be strange to be approached by someone who lives half the world away and is thinking about you to the degree that they created a story for you to star in.

KALING: But it is a bad idea to write when there is only one person who can play the part. That is the worst thing to do. I didn’t even know. You could be in the throes of an acrimonious divorce. You could be an alcoholic. You could have been unable to leave England legally to act for some drug-related reason.

AP: Is it difficult to believe when someone says that they’ve written something for you?

THOMPSON: It doesn’t happen very often. The only other times it’s happened I’ve always been an elderly archaeologist or geography teacher or someone developing dementia or Alzheimer’s or someone whose spouse has died horribly and I’ve got to deal with it. So interestingly, yeah, this is the first time someone has said I’ve wrote you something, and not only is it funny but also incredibly smart and irresistible.

AP: Mindy, you’ve been both the boss and the newcomer in your career. Did you draw on that while writing?

KALING: This movie was so enjoyable because I identify so much with both of the characters. I remember vividly what it’s like to be the new person in the room, the only minority, like it was yesterday, even though it was 15 years ago. I also remember distinctly being the star and the showrunner of a show that I’ve been doing for 117 episodes and I’m impatient and grouchy and I’m paid a little bit too much and everyone is telling me yes all the time and I myself have a temper.

AP: Katherine is not a stock villain who hates other women. It just seems like it’s never occurred to her that she might benefit from a diverse staff.

THOMPSON: It hasn’t occurred to her because she’s followed the patriarchy mold like the rest of us. You know, she’s a normal human being. What choice did she have? She wasn’t brought up in an unusual matriarchy on a small island off of America and then (said), “Hang on a minute, why are there no women in positions of power? This isn’t like this where I’m from.” She has grown up the way I did seeing everything through men’s eyes.

AP: Why do you think there is still that bias against women in late night?

KALING: I think there’s historically been a feeling that late night is based on hard jokes: Set up, punchline, of daily news. And I think there’s been a bias that women can’t write those kinds of jokes. The truth is there are fewer women who are interested in it because there are almost no women who do it. So now, little by little on shows like Colbert and Jimmy Fallon, they are hiring more women. And that’s great but they need to be trained and younger women need to see that these women can succeed in these jobs.

THOMPSON: And have you noticed on almost all late night talk shows, the band is almost exclusively male.

AP: This was going to be a studio movie but ultimately went the independent route with a Sundance premiere and everything. Why did you choose that path?

KALING: Because Fox2000 gave me the movie back, they didn’t want to make it. And now they’re not a company. I’m not saying there’s a correlation, but that’s the truth. It was supposed to be a big, glossy New York City movie, and then the company who was going to make it like that gave it back to me. They lost faith in it. And so it was an indie movie. To make a movie like this in 25 days with $11 million is extremely hard. NVG