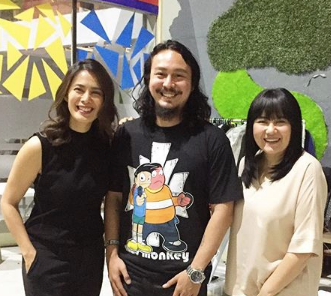 Actor Baron Geisler received actress Angel Aquino’s support in his return to television. Geisler recently joined ABS-CBN’s “Ang Probinsyano,” which Aquino is a part of, as a guest star.

Aquino took to social media in expressing her happiness for Geisler, who she calls her little brother. In her post, she shared a selfie of her and Geisler.

“To you who have flown and dove and soared and crawled, I am happy to see you finally find your place in the sun!” Aquino said via Instagram on May 2. “Now D and I can watch you closely and be there for you more. Love you my little brother!”

Geisler was recently in ABS-CBN’s headquarters where he met up with Aquino and veteran actress Lorna Tolentino. The three were all smiles as they posed for pictures together. Geisler is a self-confessed “fanboy” of the two actresses.

Prior to “Ang Probinsyano,” Geisler starred in Brillante Mendola’s drama film “Alpha: The Right to Kill,” which was released last January. He had expressed the hope to return to show biz after spending some time in rehab following a physical altercation with family members back in March 2018.

Geisler has since flipped over a new leaf in his journey to recovery and healing and now speaks the gospel, educates on mental health, and runs a barbershop in Cebu, aside from acting.  /ra