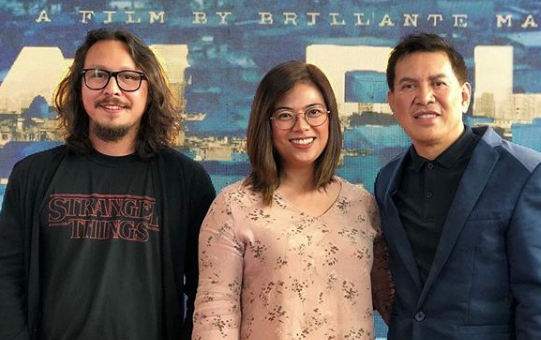 A healthier- and happier-looking Baron Geisler was spotted recently in a private screening of Brillante Mendoza’s drama “Alpha: The Right to Kill” held at The Podium mall, ahead of its slated nationwide release on Jan. 16.

The film, which won the Special Jury Prize at the 66th edition of the A-list San Sebastián Film Festival in September 2018, sees actors Allen Dizon as corrupt cop “Moises Espino” and Baron as “Elijah Filamor,” a thug and police informer. They both earn extra from the operations of drug lord “Abel Bautista.” It is a brief, yet significant, role played by Geisler.

The private screening of “Alpha…” took place last Jan. 11, as per the Film Development Council of the Philippines (FDCP), simultaneous with the opening of the Directors’ Club in the Ortigas mall. Geisler shared some scenes from the screening via Instagram, in which he also thanked his fans for all the support.

The actor was palpably excited for his new film. He had been on a hiatus from show biz, after all, and had to go back to rehab after he was involved in a physical altercation with family members in March. Geisler has since flipped over a new leaf in his journey to recovery and healing, however, and now speaks the gospel and educates on mental health.

The peaceful aura of Geisler was pointed out by FDCP chairman Liza Dino, who took to Instagram on Jan. 11 to praise the actor. The two crossed paths during the screening and Dino could not help but commend him for how far he’s come.

“You have no idea how proud I am to see you so clean and calm and at peace with yourself,” Dino wrote. “You look amazing, Baron, and I can see that you are genuinely pleased with who you are now. Sana magtuloy-tuloy na…”

You have no idea how proud I am to see you so clean and calm and at peace with yourself. You look amazing, Baron, and I can see that you are genuinely pleased with who you are now. Sana magtuloy-tuloy na. You are the captain of your own ship. To sink or swim will be your own choice. I'm just here. I'm a text or call away. Alam mo yan. Grabe. I'm sobrang proud of you! Hugs. Congrats on this film and your next ones. Pakabait na ah!

Geisler, on his end, shared in a recent interview with ABS-CBN that it was his prayer to be given a chance to return to show biz.

As per Geisler, he promised to himself that he would keep working and sustaining his sobriety. “Ipinapangako ko po sa sarili ko to keep working on my program, my structure, and sustain sobriety. I’m praying to sustain my work, my job and my business.”